A follow-up on my previous blog entry on the Sino-Russian Mi-171 joint venture (here). In additional to civilian service, it seems that the Chinese assembled Mi-171 has entered service with the PLA 2nd LH regiment, 13th Group Army, Chengdu MR.

On the eve of the Army Day of the Chinese People’s Liberation Army (PLA) which falls on August 1, two helicopters of an aviation regiment of the air force under the Chengdu Military Area Command (MAC) of the PLA hedgehopped through the Yarlung Zangbo Grand Canyon for the first time, filling in many gaps of this type of helicopter of the PLA Air Force in flying in mountainous area, landing on hilltops and flying in valley as well as comprehensive maintenance support in the area of the Yarlung Zangbo Grand Canyon.

The Yarlung Zangbo Grand Canyon is the largest canyon in the world. Its total length is 504.6 km with an average depth of 2,268 meters. The deepest place of the canyon is 6,009 meters.

The two home-made helicopters participating in the plateau training took off from an airfield in the west of China’s Sichuan Province and flew a long range to the canyon to have adaptability training on such highly difficult subjects as hovering, taking off and landing as well as field landing comprehensive flight during the maneuver by adopting the methods of gradually increasing altitude and weight. They overcame such 12 training difficulties as flight with full load and at high ceiling speed in plateau area in succession.

The helicopter plays an important and irreplaceable role in the tasks of transporting materials, handling emergencies and searching and rescuing people on the snow-capped plateau. To verify the capability of this type of home-made helicopter in flying in plateau area and implementing combat tasks, the regiment obtained 1,000-odd valuable plateau flight data of the helicopter through this trial training.

By Zhang Fengqiang and Hu Xiaoyu 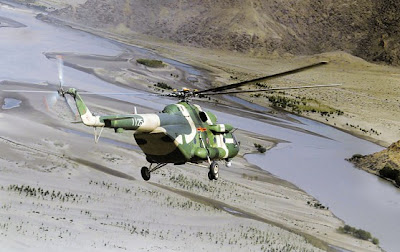 Well this development now puts the spotlight on the Z-8, will the PLA continue to buy this large helicopter or will the locally-assembled Mi-171's replace it?

Lately, the PLA and PLAN have been buying more of the new Z-8 models, it has even appeared in the Hong Kong garrison.

or could be that it is cheaper for the PLA buy something they already know how to support.

I think it is a parallel development.