Type 69 sleeps with the fishes

The last call of duty for 25 Chinese-made tanks will not be as killing machines but to provide a breeding ground for marine life in the Gulf of Thailand.

The T69-2 tanks have been handed over to the Department of Fisheries and will form artificial reefs.

Some were transported by truck from the Surathampitak Camp in Nakhon Ratchasima to Bangkok's Klong Toey Port yesterday.

Then they will be shipped from the port and placed in the compound of Thaksin Ratchaniwet Palace in Narathiwat before being dropped into the Gulf of Thailand off Narathiwat and Pattani.

The tanks will serve as artificial reefs to provide breeding grounds for marine life.

Col Mungkorn Wankrua, deputy chief of the Ordnance Department's munitions maintenance centre, said yesterday the delivery of the tanks was in response to Her Majesty the Queen's artificial coral project initiated to improve marine ecosystems and increase fish stocks in the sea off Thailand, particularly in the southern provinces of Narathiwat and Pattani .

The tanks were placed in service for the 16th Tank Battalion in 1987 and decommissioned in 2004.

The army purchased them from China in 1987 when Chavalit Yongchaiyudh served as the army chief, an army source said.

Gen Chavalit was then known to have friendly relations with senior Chinese army officers.

When he was in the top position, his policy was to modernise the army using the model of the US army.

But he looked to China for help to realise his ambition. "The Chinese tanks were not so good compared with those from Europe," the source said.

"But for Thailand, which did not have much money at the time, it was better to get them than nothing. They were bought at a 50% discount."

The problem came when the Chinese army stopped manufacturing the tanks and parts became scarce.

The Thai army could not afford to repair the tanks, the source said.

Maintenance works for the tanks stopped six years ago because there were no more parts available, the source said.

* thanks koxinga for the news.

Workers pushed an old tank from a ship into the sea off Narathiwat province, Thailand, Monday. Junk tanks will form artificial reefs and provide home for fish. (Sumeth Parnpeth/Associated Press) 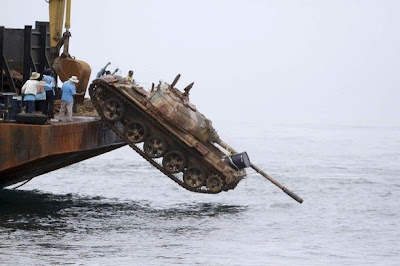 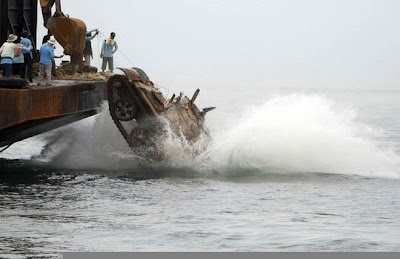 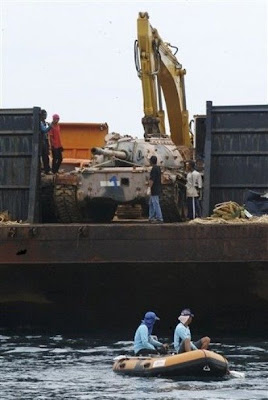 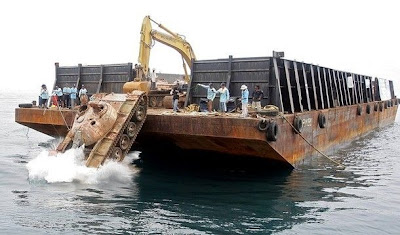 Posted by Coatepeque at 8:53 PM

A video segment of this was included on the German TV news program included on the PBS World channel here in America. They went into more detail as to why the coral reefs there needed extra material for marine life to utilize.
The tanks, I could see, had had their engines removed and probably other internal hardware looted as well.

I hope the tanks are cleaned of any toxic material or else the fishes are gonna mutate into monsters! or at least give us food poisoning xD