You can watch a Reuters video report of the V750 unmanned helo from MarketWatch.com (yeah, of all places) 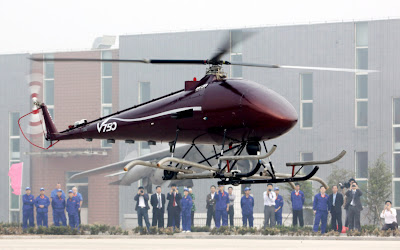 JINAN, May 7 (Xinhua)-- An unmanned helicopter, the largest of its kind in China, successfully completed its first flight in Weifang City of east China's Shandong Province Saturday.5

The medium-sized unmanned helicopter, with a maximum takeoff weight of 757 kg, departed from the flight-test center of Weifang Tianxiang Aerospace Industry Co.Ltd in the morning and hovered for ten minutes, performing a few maneuvers before finishing with a stable landing.

The helicopter, model number "V750", has a load capacity of over 80 kg. It can fly a maximum speed of 161 km per hour with a cruising duration of over four hours. The aircraft can be controlled by humans within a distance of over 150 km or automatically fly following input by its programs.

Further, it could be used in surveillance, search and rescue, and scientific exploration in both military and civilian purposes, said Cheng Shenzong, Chairman of the Weifang Tianxiang Aerospace Industry Co.Ltd.