While China continues to play the “I have no recollection of that senator” card when asked about Pakistan’s Gwadar offer by saying that the port had neither been offered nor accepted. (here) However, the Chinese naval base question is still generating news headlines around the region now with Burma joining the fray. 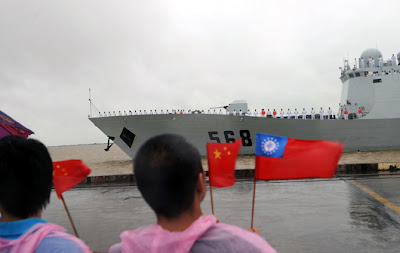 Thein Sein embarks on Thursday on his first official visit to China as Burma's new president with a three-day trip to Beijing where he is expected to discuss in depth the issue of China's navy docking in Burmese ports, and the Chinese desire to provide naval protection for its oil and gas facilities at the Burmese seaport of Kyaukpyu in the Bay of Bengal.

Other issues of mutual concern, such as border security, military relations and business agreements, are expected to take a back seat on this visit.

According to official sources in Naypyidaw, Chinese officials have repeatedly raised the issue of mobilizing its naval forces in Burmese territorial waters in recent months amid the superpower's increasing interests in the country, most notably the Sino-Burmese oil and gas pipelines, and the Chinese navy's activities in the Indian Ocean, particularly patrolling against Somali pirates.

Chinese officials are not suggesting a Chinese navy base in Burma, but having the permission to dock their warships at Burma's ports while they are patrolling the Indian Ocean and Somalia, said a source who spoke on condition of anonymity. The issue is still under discussion.

However, Burmese military sources have said they believe that China is more concerned about protecting the strategic port of Kyaukpyu, a multi-billion project that Beijing financed.

After the pipelines are finished in 2013, they are expected to have the capacity to transfer to Yunnan Province more than 80 percent of China's imported oil from the Middle East and Africa, as well as Chinese-purchased natural gas from Burma's Shwe Gas Field.

Shwe Field is currently Burma's largest gas reserve with an estimated 7.0 trillion cubic feet of natural gas. It was discovered in 2004 and is likely to be operational by 2013. The Burmese regime chose to sell the natural gas from Shwe Offshore Field to China over another energy-hungry neighbor, India, in 2007, a move that consolidated the junta's position as a valued ally of Beijing.

The pipeline project includes upgrading the airport on Ramree Island where Kyaukpyu is located. Residents of Ramree Island said that they have seen not only Chinese workers, but also Chinese military personnel in recent years on the island.

Chinese interests include the protection of oil tankers. Beijing has sent warships to Somali waters in the past two years, a maneuver that marked the superpower's the first ever naval mobilization outside the Pacific Ocean.

Returning from a counter-piracy operation in the Indian Ocean in August 2010, two warships, the Guangzhou and the Chaohu, docked at Thilawa Port, near Rangoon, for a five-day visit. Burmese and Chinese state media reported at the time.

Beijing's s development of naval supremacy in the Indian Ocean region not only involves Burma, but another key ally, Pakistan.

According to the Financial Times, Pakistan's Defense Minister Chaudhry Ahmed Mukhtar said that Islamabad had offered China the port of Gwadar on its western coastline to build a naval base and maintain a regular presence there.

As per the Sino-Burmese tie, China and Pakistan this year celebrate their 60th anniversary of friendship.

According to Chinese experts, the Chinese government is attempting to shift from its longstanding "One-Ocean" policy to a "Two-Ocean" strategy taking in both the Pacific and Indian oceans. Its Indian Ocean allies, Burma and Pakistan, are key to this ambition, they say.

In a 2009 report on the Sino-Burmese relationship, Chinese scholars Li Chenyang and Lye Liang wrote: Hence, a core objective of Chinaâ€™s policy towards Myanmar [Burma] is to establish a strategic network of road, rail and air transport from Yunnan Province in the southwest through Myanmar to the Indian Ocean and also to construct water, oil and gas pipelines.

Apart from the naval issue, Thein Sein's China trip will likely include discussions on the stability of the countries' shared 2,200 km border where Burma's government forces have faced off against several ethnic armies in recent years.

According to reports from Burmaâ€™s northeastern Shan State, three Chinese engineers working at Tasang hydropower project, near the towns of Mongpan and Mongtong, have disappeared since May 17, alongside a Burmese engineer and three workers.

Burmese troops have joined forces with Chinese security personnel to search for the missing persons whose fates are still unknown.

Ahead of Thein Sein's visit, Chinese ambassador to Burma Li Junhua said the trip would certainly push the two countries strategic and mutually beneficial cooperation towards a new high, according to the Chinese state-run Xinhua news agency.

Meanwhile, North Korean leader Kim Jong-il is reportedly to arrive in Beijing on Wednesday. North Korea nurtures strong relations with both China and Burma. But while China is the largest supplier of arms to the Burmese armed forces, there is allegation that Burma has been developing missile technology, underground facilities and possible nuclear facilities with North Korean assistance.

Posted by Coatepeque at 8:11 PM