Slow boat to Shanghai for the Qing class SSK.

The latest in a series of new equipment revelations, photos out of Wuhan seem to indicate that the construction of yet another SSK (sometimes referred to as the 'Qing' class SSK on the China-Defense Forum) is has been completed and is set sail to Shanghai to join other Wuhan constructed subs there for a final inspection before commissioning.

Even though virtually nothing is known about its improvements over the previous Yuan class SSKs, there is plenty of speculation in the forum that this new submarine is enlarged to accommodate a limited number of land attack cruise missiles such as the DH-10 - to be launched through either torpedo tubes or vertical launch systems. Moreover, once knowledge about the extent of the modifications becomes more available, we will be better able to assess the extent to which the PLAN is satisfied with the Yuan class SSK's ability to survive and operate in the regional ASW environment.

Whatever improvements this submarine will feature, it would - along with other recently launched vessels - ensure that the Varyag will have no shortage of brand new escorts to choose from, once the slot machines and poker tables are properly arranged aboard this magnificent casino ship. 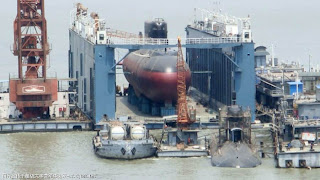 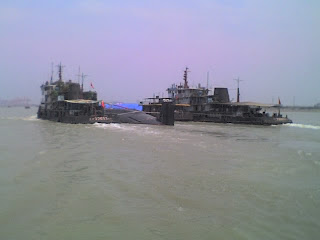 Save the panorama photo of the Wuhan shipyard taken in January to your local workstation for better viewing.

And we're sure it's not a KILO under maintainence? Just curious, since that many similar SSK classes is a bit odd.

Then again there have been images in the past of a SSK with an X shaped fins instead of the more traditional crucifix.

Nanxin said...
This comment has been removed by the author.
4:18 PM

take a look at my previous blog entry

Due to the obvious bump at the bottom right below the sail, it may very well be a ICBM testbed rather than a new SSK? Most guys in Chinese military forums seem to think so.