Our friend cloneattacks' OpEd on the China Airforce's procurement program.

Ok, in my opinion, the future lightweight fighter of the PLAAF/PLANAF, the most profitable military procurement in Chinese history that will see a design replacing the J-7, Q-5 and J-8 and also eventually substituting the J-10A in production, will rest on the J-10B and SAC's new design.

The J-20 could turn out to be too expensive. This would likely limit the number of aircraft the PLAAF will purchase. The complexities of the aircraft will also mean that there could very well be delays down the road and it would prohibit rapid production. Thus the PLAAF's future will still rely largely on more affordable light to medium designs in a kind of high-low mix. This is where SAC's new design comes in. While it may have lost in the design of the future air superiority medium to heavy fighter, SAC is now armed with a lot of knowledge to apply to a lighter design.

The only problem to SAC's gamble is the J-10. PLAAF and PLANAF are firmly committed to the J-10, having received over 200 copies. Although SAC's new design is a generation ahead of the J-10, CAC has smartly evolved the design into the J-10B. It seems that the PLAAF is already evaluating the J-10B (orders imminent?).

While the J-10B is not as stealthy, its design is based on relatively mature technology from nearly two decades of J-10 development married to more modern subsystems that CAC could have integrated onto the J-20. The J-10 seems to be well-liked by the PLA, with more units converting and its capability as a multirole fighter was also briefly demonstrated with its delivery of a pair of LGBs in last year's Peace Mission exercise. I would regard the J-10B as very similar to the SAAB Grippen in terms of size, capabilities, technological level, and probably cost.

SAC's design could be slightly more advanced than the J-10B. Its greatest design edge is its stealthy low-RCS design. Depending on what sort of engine it uses, the new aircraft could possess a greater power-to-weight ratio than the J-10 and even achieve advanced combat aircraft features like supercruise. However, SAC is virtually starting from scratch. This means it will take time to catch up with where the J-10B program is currently at.

And even if SAC's design is more advanced and capable than the J-10B, the PLAAF may not necessarily go for it. Take for instance the PLAAF's preference for the JL-9 over the L-15, even though the L-15 represented a quantum leap over the former. The J-10B would win brownie points for being compatible with a lot of J-10A components, and it would not require a radical investment in new production facilities, maintenance tools, training simulation systems, etc.

How about the export market? SAC could promote its newest design strategically as a "clean slate" design where foreign customisation and input can be incorporated from the start. SAC could replicate Korea's approach with the KF-X, inviting partners like Turkey to be a program participant. However, with most big buyers of new generation aircraft seemingly committed, especially Turkey and Brazil, it seems that the only likely partner would be Pakistan. 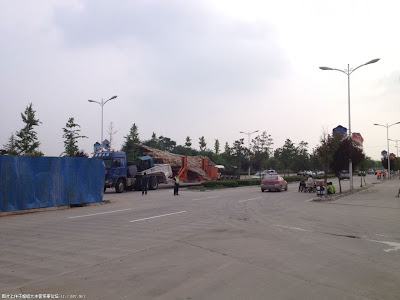 Posted by Coatepeque at 7:41 PM

Indeed, J-10B makes far more sense as the cheap and mass-produced low-end fighter, but the PLAAF does not want to see SAC dies. To this end, it was willing to pay for junk like the J-8II. This new jet has to be really bad for the PLAAF to pass completely.

Well, the new SAC fighter is not funded by PLAAF. It is funded by AVIC and PLAAF has not committed to buying it.