While China is suffering from the worst flood in decade that left more than 2,100 Chinese dead and twelve million people evacuated from their homes nationwide. It sends more aid to Pakistan. 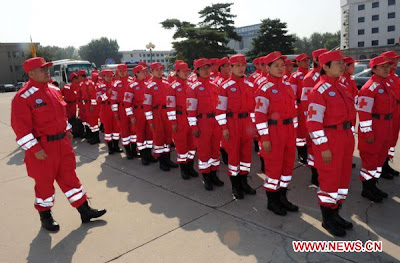 The aid includes relief materials such as 30 tonnes of medicines and water purifiers, 1,000 tents and 50 power generators, according to China's Ministry of National Defense.

The materials were gathered by the Chinese military forces within 48 hours after Chinese government promised to offer assistance to flood-hit Pakistan on August 1.

The shipments mainly contained urgently-needed daily necessities, including grain, cooking oil, flour, sugar, salt and medicine, the ministry said in a brief notice on its website.

The supplies are to be transported through a land route to the Sust dry port near the Pakistan-China border from Kashgar in northwest China's Xinjiang Uygur Autonomous Region, the statement said.

However, the ministry did not say when the supplies would arrive, as workers were still rushing to repair the road linking Kashgar and Khunjerab Pass.

China is one the first countries to respond to the relief needs of Pakistan when it was hit by the worst floods in 81 years. China's first delivery of aid, worth 10 million yuan, was delivered on Aug. 4. So far, 40 million yuan worth of supplies provided by China have arrived in Pakistan.

Masood Khan, on behalf of the Pakistani government and people, expressed his gratitude for China's assistance, saying the food, tents and medicine provided by the Chinese government were Pakistan's most urgently needed materials.
Editor: Lin Zhi

Well, China should be economically sound enough to take care of herself. But Pakistan really needs aid right now so it's good that China is sending more aid =)