Bend-based Epic Air to be purchased by China Aviation 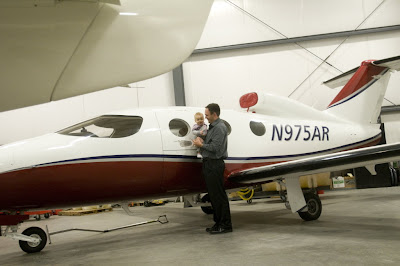 Bend-based Epic Air to be purchased by China Aviation
By Richard Read, The Oregonian
April 02, 2010, 6:25PM

At a Portland judge's direction, Chinese aerospace executives find themselves dividing the spoils of Epic Air with pilots who were assembling kit-built aircraft at the Bend company's plant when it went bankrupt last year.

U.S. bankruptcy Judge Randall Dunn put the odd bedfellows together Friday when he ruled that China Aviation Industry General Aircraft Co. Ltd. could buy Epic for $4.3 million -- but only if the Chinese company signed an agreement before Thursday to let a group of Epic customers restart and manage aircraft manufacturing in Bend.

If China Aviation fails to agree with the LT Builders Group by then, Dunn is prepared to let a third bidder -- Harlow Aerostructures, of Kansas -- buy Epic's assets. Under either scenario, airplane building appears set to return to Bend, where the recession has taken an especially high toll.

"I was pleased that the judge found a way to at least attempt to keep the business in Oregon and to re-establish the business, hopefully at the Bend airport," said Gary Firestone, Bend assistant city attorney. "Putting some of those capable, talented people to work will be good."

Dunn's ruling followed around-the-clock negotiations among China Aviation, LT Builders, Harlow and other parties since a Tuesday hearing in his courtroom. The outcome is a far cry from China Aviation's original intention to ship Epic's assets to China, and from Dunn's statements Tuesday lambasting LT Builders for inadequate financial proposals.

The Chinese got what they so badly wanted, the technology behind a sleek, fast turboprop plane that they can develop for China's embryonic private and charter market. The amateur plane builders, who include experienced business executives, don't get control of Epic as they'd hoped, but they get to develop the U.S. business under license from China Aviation.

"It's not the position that we wanted to be in," said Doug King, an LT Builders manager whose plane remains unfinished in the Bend Municipal Airport building where Epic operated. "But we're going to make the best of it."

The bottom line, said LT Builders co-manager Daryl Ingalsbe, president of Independent Technologies Inc. in Omaha, is that, "We'll be building LTs in Bend. I just don't like what a lot of corporate America has done, shipping manufacturing to Mexico and China and everywhere else to make a dollar."

The loser in the latest round appeared to be Harlow Aerostructures, which bid at an earlier Portland bankruptcy auction for Epic's assets.

Not so fast, however, said Phil Friedman, Harlow's chief executive.

Friedman said after Dunn's ruling that he wouldn't wait to see whether China Aviation and LT Builders reached agreement. He wants to elbow out the Chinese with a better deal for LT.

Friedman says the ultimate prize is certification of Epic aircraft for mass production. He'd like to accomplish that in the United States, instead of watching it happen in China.

"That's the real jewel in this," Friedman said. "We could have 500 employees in Bend if we were successful with certification and manufacturing."

But Ingalsbe noted Friedman made an earlier offer that LT Builders rejected. And King said the judge was "painfully clear" in his instructions for LT to work with the Chinese.