FC-1 to perform flight demos at the 2010 Zhuhai airshow

The reporter learned from Zhuhai, a city in south China’s Guangdong Province, on April 6 that the 8th China Air Show would be held in Zhuhai from November 16 to 21. China North Industries Group Corporation will make its debut at the air show and the Air Force of the Chinese People’s Liberation Army (PLA) will also be one of the sponsors of the air show.

The “August 1” Aerobatics Team of the PLA Air Force equipped with J-10 fighters will demonstrate a highly-difficult 6-aircraft-formation flight at the air show for the first time. It will also join hands with the flight demonstration team of Pakistani Air Force to show their flight skills.

In the meanwhile, the PAF has a different approach in demo-ing their JF-17s 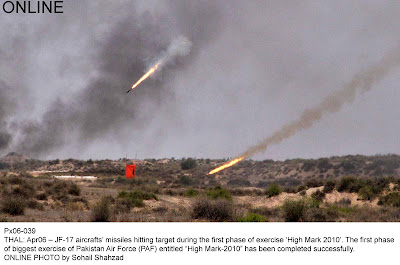 Posted by Coatepeque at 3:21 PM