A new ZTZ99 (Type99) variant or just another prototype?

This recently surfaced photo of an unidentified ZTZ 99 (Type 99) has a different turret "title arrangements" compare to the latest Type99A2 variant. It also sports a different set of headlight and a US M1 style tracks.

At any rate, the photo suggests the development of the Type99 is far from complete. 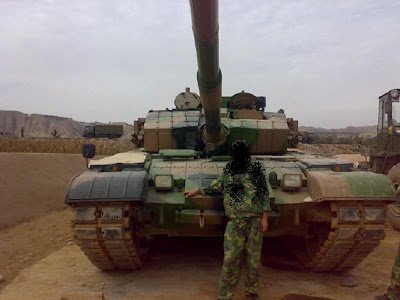 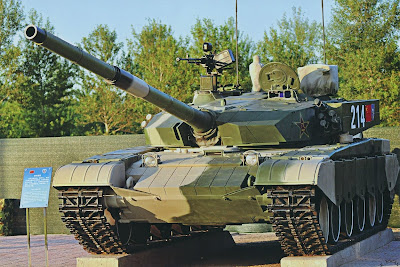 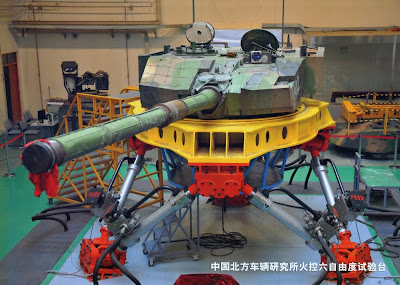 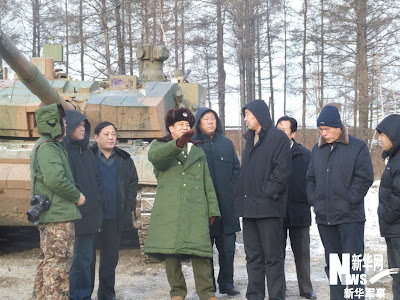 On a related note:

TAIPEI - While China continues to improve the firepower and mobility of its lighter armored vehicles, heavy armor maintains a major role in military doctrine.

No evidence was more obvious than the recent 60th anniversary parade in Beijing, when 500 main battle tanks (MBTs) and armored personnel carriers rolled past the Forbidden City on Oct. 1.

China North Industries Group (Norinco) develops and manufacturers most of China's tanks and other armored vehicles and equipment.

The Norinco ZBD97 IFV is believed to be part of an effort to construct a well-armed IFV comparable to the Russian BMP-3 series, giving airborne units protected firepower and enhanced mobility, said Dean Cheng, a research fellow at the Heritage Foundation in Washington.

"If these forces are dropped deep behind enemy lines, they would be confronting not first-line troops with heavy armor, but rear area logistics troops with a scattering of light anti-tank weapons," Cheng said. This suggests an interest in deep penetration and a greater emphasis on jointness, he said.

"If you look at their production, they do well at the armor and applique packages, they are fine at communications and fire control [with some help from other countries] and their guns and stabilization aren't bad," said Larry Wortzel, vice chairman of the U.S.-China Economic and Security Review Commission.

However, despite the impressive advancements, Norinco continues to have problems developing efficient drive trains, such as engines and automatic transmissions.

"They still have to go to Europe or Russia to get engines and transmissions," Wortzel said. "Even with all their work on big Volvo buses and large trucks under license, they don't seem to have mastered that part of it yet."

Norinco is beginning to produce a new 105mm gun-launched missile for use against armored targets, including tanks using reactive armor. According to a Norinco brochure, the missile is guided to the target by a laser.

"The 105mm gun-launched missile can also constitute a part of the T-54/T-55 or Chinese Type 59 and Type 69 MBT update package along with other considerations of upgrading," the brochure says.

The company also is producing the new MBT-2000 with a 125mm smoothbore tank gun capable of firing three types of ammunition: armor-piercing fin-stabilized discarding sabot, high-explosive anti-tank and high-explosive rounds. The MBT-2000 is outfitted with an automatic loader that can fire six to eight rounds per minute.

The auto-loader is further evidence the "Chinese military of today is not that of the past," Cheng said. "Manpower conservation measures such as autoloaders suggest that there is an effort to economize on people where possible.

"While the U.S. appears to be focusing more on counterinsurgency, the Chinese are, through their actions and acquisitions, making clear that they see the future of warfare as still involving nation-on-nation conflict involving the 'heavy iron,'" he said.

However, China also is pragmatic. There are serious internal security concerns in the rugged hinterlands of Tibet and Xinjiang that make MBTs impractical against civilian revolts. During crackdowns in Tibet in early 2008, the Chinese military sent Type 90 tracked and ZSL92 armored fighting vehicles into Lhasa to quell violence.

"Heavier vehicles are for real wars," Cheng said. China's periphery is not like Europe, "with well-paved super-highways." å

The new tank has several different features, not all of which are ideal.

Then new tracks are an obvious change, but the re-positioned driving lights has removed several blocks of reactive armor, making for vulnerable areas immediately around the lights.

An opponent would just have to shoot at the lights for a devastating hit.

It is not apparent whether the folding dozer blade is retained in the newer version as in the 99G.

The picture of the 99A2 seems to be simulator/trainer for the turret crew, the whole assembly being supported on powered hydraulic jacks.

The last picture shows a tank which is very similar to the 1st.

However, this one seems to have a complete set of laser-jamming and other turret top equipment.

Both tanks however (unlike the 99G)have a recessed or notched area on the turret roof immediately above the gunners' position where a low and wide imaging sensor is located - similar to the 99A2 on the simulator/trainer.

Inregards to ERA they are still testing, easily change config.