Norinco A-100 MRL to Pakistan confirmed. 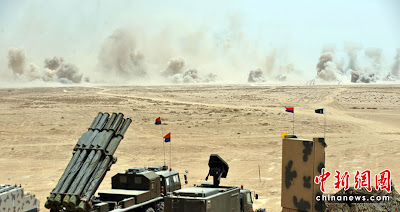 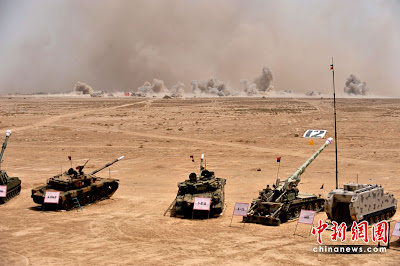 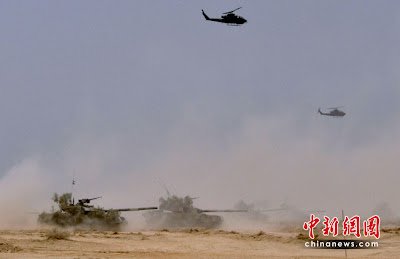 CHOLISTAN DESERT, Pakistan — Fighter jets strafed mock enemy positions and tanks rumbled across this eastern desert Sunday in a display of military might signaling Pakistan's readiness to face traditional foe India even as it battles Taliban militants on its opposite flank.

While India and Pakistan regularly carry out army drills, the demonstration close to the Indian border was part of Pakistan's biggest military exercises since 1989, when the army was celebrating its role in ousting the Soviet Union from Afghanistan.

This time around, the exercises follow successful operations in the northwest against extremists that have improved the image of the army as a fighting force after its popularity plunged during the military-backed rule of former President Gen. Pervez Musharraf. For a domestic audience, the army was emphasizing this battlefield role, analysts said.

"It is meant to signal internally that we are back to where we belong," said Moeed Yusuf, from the Washington DC-based thinktank, United States Institute of Peace. "For the world, it signals that India remains the principal threat."

There was no immediate comment from New Delhi. India generally refrains from commenting on such scheduled exercises.

Sunday's exercises were meant to replicate a counter offensive against an invading ground force. They included 21 bombing runs by various Pakistani jets, displays of anti-aircraft weaponry, tanks moving in formation and round after round of heavy artillery.

Those watching — including the prime minister, the country's military leaders and politicians — clapped as targets were hit some 2,000 meters away across the shimmering, dusty Cholistan Desert. The loudest round of applause was for when an unmanned drone was shot out of the sky by a barrage of anti-aircraft fire.

Pakistan has fought three inconclusive wars with India since the two countries were formed from the then British-ruled Asian subcontinent in 1949. The army, which has ruled the country directly or indirectly for most of the time since then, has relentlessly focused on threat from India, which has roughly twice as many troops.

Alarmed at Taliban and al-Qaida safe havens on the western border close to Afghanistan, the United States has urged the country to concentrate less on the threat from India. It wants to see more troops deployed in the northwest and more training in counterinsurgency, not conventional war fought in the desert.

Those concerns have been allayed somewhat over the last 18 months during which the Pakistan army has moved forcefully against militants in several regions close to the Afghan border. In public at least, U.S. officials have praised the army's actions and rarely berate it as was common two years ago.

After watching a display clearly aimed at the threat from India, Prime Minister Yusuf Raza Gilani several times mentioned the successes in the northwest. "The world sees Pakistan as a bulwark against extremism and militancy. It is in this struggle the nation has pledged to support the armed forces. Pakistan is fully committed to the struggle in the west," he said.

"Inconclusive" ? The 1971 war led to the eastern wing of the country becoming independent. Can't blame the blog though, its shoddy work on the part of AP

That is the reason I included the AP link

The point is Pakistan and India still have tensions, so "inconclusive" unlike WW2.

Dear Type99,
Your defence lacks logic and your knowledge of English exposes dearth of comprehension ability.I hope u atleast accept existence of Bagladesh as an independent country, at least this as a matter of general knowledge if not of English or logic.Even Pakistan recognizes that the war "concluded " with independence of Bangladesh.Why don't u acknowledge that?

LOL These Low life Indians again showing their worth.