Singapore's Teo checks out that Jian-10

In addition to the standard meet-and-greet with General Liang of the PLA, Singapore's defense minister was given a private tour of the 24th Air Division. Overall, the positive dynamic of the Sino-Singapore relations contrast sharply from the scary scenarios of Singapore becoming a "vassal of China" as Robert Kaplan suggested in his latest Foreign Affairs essay. (here)


War On Extremism, can’t have a foreign policy shift without it.

Singapore has strong military ties with the ROC (Republic of China). Since 1975, Singapore has been training troops in Taiwan under the code name of “Operation Starlight.” During its peak in the 1980s 15000 troops were trained annually. Singapore also maintains a strong military relationship with the US and allows availability of the Paya Lebar airbase and Sembawang Wharves. Singapore also plays a support role in the ongoing military operations in Iraq and Afghanistan. Coincidentally, the government of Singapore is also a strong supporter of the PRC's (People’s Republic of China) “One China Policy” and actively promotes cross-strait diplomacy championed by “Minister Mentor” Lee Yuan Yew, which puts Singapore in an awkward position. When the PRC offered Hainan Island in 2001 as an alternative training site, Singapore turned it down and refused to make public comment, fearing it may complicate its delicate position. Singapore then turned down joint military exercises requested by the ROC (Here)

Until recently, Singapore continued this balancing act of keeping harmonious relations with the ROC and the US while strengthening it’s economic ties with the PRC. During Prime Minister Wen's November 2008 visit to Singapore, the construction of a second industrial park (an eco-city) in Tianjin was agreed upon. It will be modeled after the successful Suzhou Industrial Park. For a small island state of Singapore, having access to large industrial real estate is critical for future growth.

In 2004, Singapore’s stance on the “One China Policy” was questioned in public by the then ROC pro-independent president Lee Teng-hui after Singapore’s failure to support its UN bid. For many, this diplomatic spat was seen as a departure between Singapore and the ROC: a trend that has been developing for sometime as Singapore seeks to expend its economic and cultural ties with the PRC. “Operation Starlight” is slowly being scaled down and is now under low profile. Singaporean troops in ROC wear ROC Army uniforms and are permitted limited leave to prevent local interaction. The bulk of Singapore's military training is now being conducted in Australia’s Shoalwater Bay. In January 2008, Singapore signed the first Sino-Singapore defense pact to formalize existing armed forces exchanges while pledging to work together on humanitarian assistance (Here)

Two recent events have greatly reduced the difficulty of Singapore’s balancing act. First, the US focus on “fighting extremism” coupled with the current economic downturn brings the Sino-US relationship to its closest in recent memory (minor juxtaposition in South China Sea not withstanding). Second, the election of Ma Ying Jeou to the presidency of ROC brings back the traditional Chinese concept of “Make Money, Not War” resulting in an easing of cross-strait tension. These two events give Singapore an opportunity to enhance security cooperation with the PRC without upsetting the ROC. Surely, no one would object to nations banding together to fight extremism, right?

The nine-day exercise, which is held in Guilin, China, starts on Thursday and ends on June 26.

Codenamed COOPERATION 2009, the joint CT training exercise will involve 60 participating troops each from the SAF and the PLA. It will focus on the conduct of security operations for major events and consequence management concepts related to Chemical, Biological, Radiological, and Explosive (CBRE) threats.

The SAF's participating troops are from the 2nd People's Defence Force and the SAF CBRE Defence Group. They will exercise with personnel from the PLA Emergency Response Office and Guangzhou Military Region.

Said the Ministry of Defence: 'COOPERATION 2009 marks the first bilateral training exercise between the SAF and the PLA, and underscores the progress made in the defence relationship between Singapore and China following the signing of the bilateral Agreement on Defence Exchanges and Security Cooperation in January 2008.

'COOPERATION 2009 also serves to enhance the mutual understanding and friendship between the SAF and the PLA, which interact regularly through exchanges of visits, courses, seminars and port calls.' 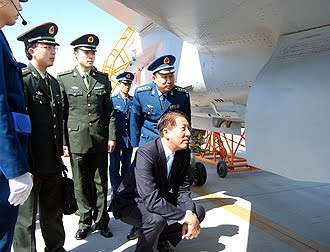 Mr Teo taking a close look at the Jian-10, a third-generation Chinese fighter jet, during a visit to the 24th Air Division of the People's Liberation Army Air Force in Tianjin yesterday. -- PHOTO: MINDEF

By Sim Chi Yin, China Correspondent
http://www.straitstimes.com/BreakingNews/Asia/Story/STIStory_518679.html
BEIJING - THE Chinese government's ability to adapt and evolve over the course of history has kept it on top of challenges at home and those posed by globalisation, Deputy Prime Minister Teo Chee Hean said yesterday.

'Its evolution is something which has enabled it to lead China into very impressive growth and development in the modern times,' Mr Teo told Singapore media as he wrapped up his official visit to China this week.

But what impressed him most during a brief visit to the China Executive Leadership Academy, sited in the old revolutionary base of Yan'an, was Beijing's ongoing efforts to instil some fundamental leadership values to keep officials and cadres grounded.

Describing Wednesday's tour of the school and the Yan'an Date Garden - a cluster of cave dwellings where Chinese Communist Party leaders such as Mao Zedong had lived - as a highlight of his trip, Mr Teo said it helped him 'understand how China today is looking back to its roots to see how it can build its future'.

While China pushes ahead with its phenomenal economic and social changes, the Chinese leadership is keen to imbue its rank and file with the spirit of the early Mao era, he noted.

'I think they are looking to make sure the kind of spirit of serving the people is maintained among officials and also the kind of values of leading a simple life, values of being able to remain connected to the people,' he said.

Liang Guanglie, state councilor and defense minister of the People’s Republic of China, held talks with Teo Chee Hean, the visiting deputy prime minister and minister of defense of Singapore, in Beijing on the afternoon of April 22.

Teo Chee Hean said that the high-level mutual-visits between the defense departments of the two countries were frequent and the exchange and cooperation were also effective. The Singaporean side is willing to work together with the Chinese side to continue to boost the in-depth development of the friendly cooperative ties between the two defense departments and the two militaries.

The two sides also exchanged views on regional situation and other issues of common concern.

Before the talks, Liang Guanglie held a welcoming ceremony for Teo Chee Hean. 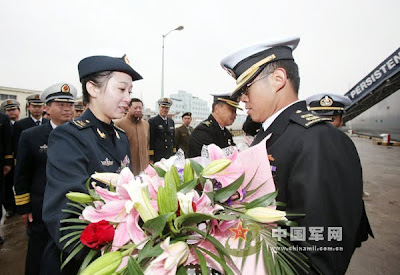 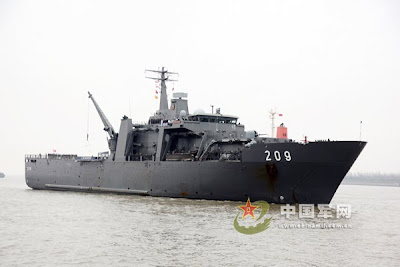 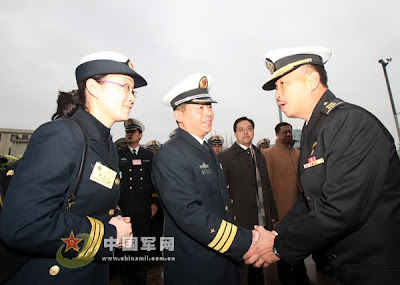