Chinese frigates and patrol crafts for the Bangladesh Navy

* thanks Maruf for the news.

Addressing the officers and sailors at the Naval Headquarters' Multipurpose Hall, she said soon two more frigates will be included to Bangladesh Navy. Besides, as a long term plan of the government to modernise the Navy, three old British frigates will be reset in the force.

The Prime Minister further said that during her recent China visit, she had requested the Chinese government to provide Bangladesh Naval Force with two newly constructed frigates including helicopter and the Chinese government gave its consent to this. Besides, naval ship Bangabandhu, which was decommissioned during the last BNP-Jamaat government on political grounds, will be made fully operational again, she said.

She further disclosed that signing of agreement has already been completed to buy two helicopters and missiles while the process for procuring two offshore patrol vessels from the United Kingdom is at the last stage.

Moreover, work is also proceeding to procure a Hydrographic Survey Vessel from UK and the process is underway in China to equip two Large Patrol Craft with missiles, Hasina said.

The Prime Minister said that these plans and programmes will be implemented by 2012 "We also have a plan to equip our Navy with submarine with base facilities to build it as a deterrent force by 2019."

Within this time, the government will take all necessary steps for setting up the Naval force's own air base, jetty for ship berthing, training school, and accommodation facilities for officers and sailors, she said.
"If the plan, which has been chalked out for modernisation of Navy, continues, Insha-Allah, you will advance much to build a three-dimensional force by 2021."

The Prime Minister urged the members of the Bangladesh Navy to maintain chain of command and work with outmost sincerity, honesty and punctuality to safeguard the country's maritime boundaries and the valuable resources.
She said in the process of modernising the Naval force, the government will not hesitate to make budgetary allocation.
The Prime Minister also replied to some questions from the Navy members. In one question, a member of the Navy requested the Prime Minister to ensure housing facilities for them like other defence forces of the country. Replying to another question, the Prime Minister said the government is actively considering to arrange Sea Allowance for the members of the Navy members.

Earlier, the Prime Minister separately addressed the officers of Bangladesh Navy when she thanked the Navy for protecting the country' s sovereignty, sea resources and vast population of the coastal areas with limited number of vessels and workforce. 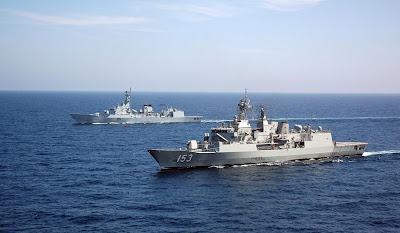 is this a real threat