The little corvette that could

It seems that the China navy is not the only one with a corvette feve.

TAIPEI, Taiwan — Taiwan is to build 12 new “stealth” warships in reaction to China’s naval build-up, the island’s navy announced May 15.
Navy Capt. Chu Hsu-ming told reporters Lung Teh Shipbuilding Co, a private firm, has been awarded a Tw$890 million ($30.1 million) contract for the construction of the first 500-ton corvette with delivery slated for2014.
The prototype will be the first of 12 such twin-hulled boats, which the designer said are hard to detect on radar.
“After the prototype is completed and tested, its specifications may be fine-tuned for the mass production of the (remaining) ships,” Chu said.
Each of the vessels will be armed with up to eight Hsiung Feng III anti-ship supersonic missiles as well as eight Hsiung Feng IIs.
Ties between Taiwan and China have eased markedly since Ma Ying-jeou of the China-friendly Kuomintang party came to power in 2008, ramping up trade and allowing in more Chinese tourists.
But Beijing still refuses to renounce the use of force, even though Taiwan has been self-governing since the 1949 end of a civil war, which has prompted the island to continually modernize its armed forces.


That is one slick looking cat 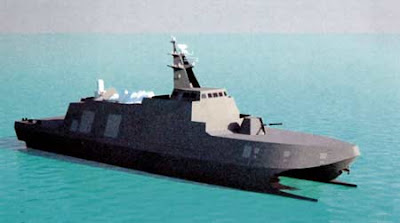 this is twice the weight of the type 022, and it carries twice the amount of missiles. its a bit late though, would barely make a difference against 80+ type 022 launching c-803s simultaneously.