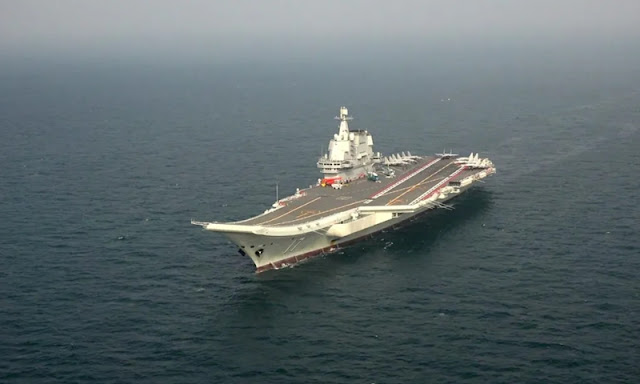 China's second aircraft carrier, the country's first domestically built one, the Shandong, is now conducting testing and training missions at sea, the state broadcaster confirmed on Wednesday, after local residents saw the warship leaving a shipyard on Monday.

The Chinese People's Liberation Army (PLA) Navy warship Shandong is conducting testing and training missions in an undisclosed location while its troops studied Chinese President Xi Jinping's speech on Tuesday when he was attending a plenary meeting of the delegation of the PLA and People's Armed Police Force, China Central Television (CCTV) reported on Wednesday.

Xi, also general secretary of the Communist Party of China Central Committee and chairman of the Central Military Commission, on Tuesday stressed achieving the targets and missions of strengthening the national defense and armed forces for 2020.

As China's first domestically made aircraft carrier, the Shandong has been actively conducting real combat-oriented training since its commissioning in December 2019, the report said.

Since the COVID-19 outbreak, the aircraft carrier neglected neither epidemic control nor testing and training, as professional training has been conducted for individual sailors, battle positions and departments, CCTV reported.

"Troops on the aircraft carrier need to form independent comprehensive combat capability and integrate into the combat group system as soon as possible," Li Yongxuan, executive officer of the Shandong, said on CCTV.

"We will do our best to make our aircraft carrier capable of fight and win," Li said.

Xi's important speech pointed the direction to push ahead with various tasks for the troops under the condition of regular prevention and control of the COVID-19 epidemic and boosted the confidence of the troops, the report said.

The troops are determined to achieve the targets and missions of strengthening the national defense and armed forces for 2020, according to the report.

The CCTV report came after a series of photos and videos uploaded on China's social media platforms showed the Shandong leaving the Dalian Shipyard in Northeast China's Liaoning Province on Monday.

According to a navigation restriction notice released by the Maritime Safety Administration on Friday, entry into a vast area of the Yellow Sea is prohibited due to a military mission from Monday to June 2. It did not mention if the aircraft carrier would be taking part in the mission.

The Shandong was commissioned by the PLA Navy on December 17, with a ceremony held at a naval base in Sanya, South China's Hainan Province, after which it sailed back to the Dalian Shipyard in late December for maintenance.

Beijing-based naval expert Li Jie told the Global Times that after the long distance round trip from Dalian to Sanya, the Shandong needed time to make improvements and calibrations based on possible problems it encountered.

This training mission will likely test if every adjustment is working well, Li predicted, noting the Shandong is now laying the foundation for forming initial operational capability.

When the Shandong left the shipyard, no aircraft was spotted on the fight deck based on photos and videos taken by local residents. But the CCTV report showed J-15 fighter jets on the carrier.

This probably means the fighter jet takeoff and landing missions are part of the training, a military expert who asked not to be named told the Global Times on Wednesday.
Posted by Coatepeque at 7:39 PM