This recently revealed mini-F-22P could be one of the five ordered by the AFFHS. Together with the transferred Type R22T Fuchi class AOR Fuxianhu 888 from the navy (here), the AFFHS is getting a significant boost in protecting China's maritime interest in the civilian sphere. 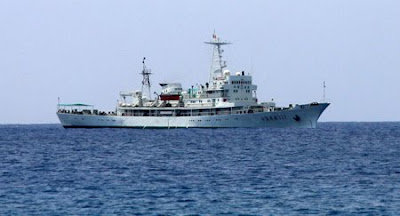 Yuzheng 311, China's largest fishery administration vessel, is pictured as it arrives in the Xisha Islands in the South China Sea, March 17, 2009. [Xinhua]
"China Yuzheng 311" will patrol the Xisha Islands such as Zhaoshu, Yongxing and the East Island to give Chinese fishermen in this area more powerful protection for their interests and safety, said Liu Guimao with the Administration of Fishery and Fishing Harbor Supervision for the South China Sea.

"China Yuzheng 311" made a week-long voyage to the region from its home port in Guangzhou before arriving Tuesday noon. The vessel stopped at a naval base in Sanya in the southern Hainan Province last Thursday for supplies and set sail for the islands, which are about 180 nautical miles southeast of Hainan.

However, the vessel encountered a storm which delayed its arrival in the islands which was expected to be on Sunday, the vessel's captain, who preferred not to be named, told Xinhua.

With 112.68 meters in length, 15 meters in width, and a maximum displacement of 4,600 tonnes, the vessel is the largest of its kind in China.

Equipped with the Global Maritime Distress Safety System (GMDSS), an advanced communication system initiated by the International Maritime Organization (IMO), "China Yuzheng 311" can sail non-stop for 8,000 sea miles at a maximum speed of 22 knots. It was converted from a rescue vessel of Chinese navy

Wu Zhuang, director of the Administration of Fishery and Fishing Harbor Supervision for the South China Sea, said the vessel will escort Chinese ships around the islands where "fishing illegalities by neighboring countries are on the rise."

"China has indisputable sovereignty over the islands of the South China Sea and their adjacent waters," Foreign Ministry spokesman Qin Gang said Tuesday.

His comments came after he was asked to respond to accusations of China "flexing military might" by sending ships to the South China Sea.

"The vessel was heading there for a routine fishery administration mission," said Qin.

mini-054? It seems to me to be closer in design to the Type 22 FFG's being built for the Pakistani Navy.

Overall quite close to an improved Jiangwei-class frigate.

I like the valuable information you provide in your articles. I’ll bookmark your weblog and check again here frequently. I am quite sure I will learn many new stuff right here! Best of luck for the next!

Valuable information about China yacht. Yes you are Best Mobile wallet right the China introduced many type of yacht. They provides all over the world