China to contribute 32 Type 05P (ZSL05) APC to the African Union-UN peacekeeping mission in Darfur (UNAMID). They are being shipped to Sudan from the Anhui Hubin Machinery Factory on January 28th (here).

The ZSL93 is the PLA’s security armored "truck". In essence, this 10-ton light APC is a standard PLA HY472 6x6 truck on an armored shelf with 80% commercial parts. It is geared for security duty with a smoke generator, siren and police flash lights. While the other PLA AFV is armed with a 12.7 HMG, the ZSL wears a lowly 7.62 machine gun.

The ZSL93 was first revealed to pubic in the 1984 National Day Parade and again in the 1997 HongKong handover ceremony. It is currently in service with the Beijing, HongKong and Macou Garrisons and the CMC’s Central Guard.

In 2005, a modernized variant of the ZSL05 was developed for the PLA’s peacekeeping operations in Africa.

Thus far, Niger is the only known operator of the WZ523 outside of China. Since HY trucks are widely exported to Africa finding spare parts should be easier compared to other Chinese APCs. 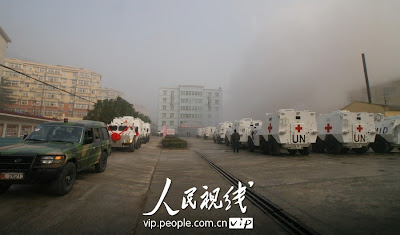 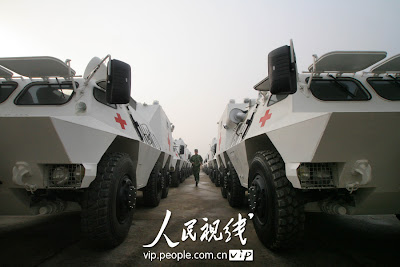 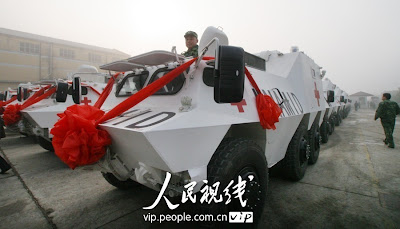 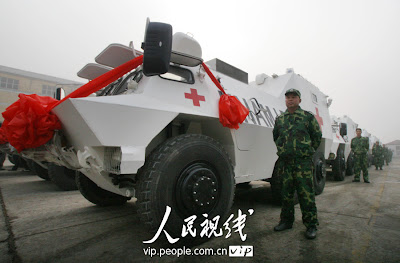 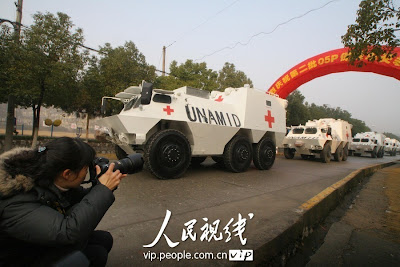 China's stand on the UNAMID mission.

"Hardly a crisis confronts us that does not require actors to cooperate at multiple levels in the search for solutions," Ban said in an opening speech, fresh from a two-day retreat exploring "new avenues for cooperation" with leaders of more than a dozen regional groups, ranging from the African Union (AU) and Arab League to the North Atlantic Treaty Organization (NATO), Organization of American States (OAS) and Organization of the Islamic Conference (OIC).

"That is why the relationship between the United Nations and regional organizations is so important," he said. "They are part of a new landscape, one in which the problems we face are so complex and interlinked that no one can work in isolation, and no one can afford to do without the benefits of cooperation and burden-sharing."

Many of the regional group leaders attended the council session at which Ban cited already existing cooperation such as UN support for the AU Mission in Somalia (AMISOM), the AU-UN peacekeeping mission in Darfur (UNAMID) in Sudan, a wide-ranging relationship with the European Union (EU) and the Organization for Security and Cooperation in Europe (OSCE) in the Balkans, and other operations from Honduras to Iraq.

"Yet we can and must go further still," he said. "The United Nations continues to bolster its capacity to prevent conflicts and mediate solutions. We continue to improve our ability to deploy more effective peacekeeping, peace building and humanitarian presences. These investments have positioned us to be a better partner to our regional counterparts."

In a presidential statement, the council promised further steps to promote closer cooperation with regional and sub-regional organizations in the fields of conflict early warning, prevention, peacemaking, peacekeeping and peace building.

"The Security Council is resolved to strengthen United Nations support for the peaceful settlement of disputes through improved interaction and cooperation with regional and sub-regional organizations," said the statement, read by Ambassador Zhang Yesuiof China, who holds the council's rotating presidency for January.

It stressed the role that regional and sub-regional organizations can play in post-conflict situations in peacebuilding, recovery, reconstruction and development, and called for cooperation between the UN Peacebuilding Commission and the organizations.
Editor: yan

Posted by Coatepeque at 1:12 PM

This is a really good read for me, Must admit that you are one of the best bloggers I ever saw.Thanks for posting this informative article.