In that light, the building of new campuses and research centers at China State Shipbuilding Corp (CSSC)'s Jiangnan Changxing shipyard, China's oldest and largest, can be seen as attempt to address these shortcomings. The Jiannan Shipyard was established in 1865 as part of the Qing Dynasty's Self-Strengthening Movement to industrialize China. 145 years later, it has designed and produced China's most advanced vassals such as the Type 052C DDG and the Yuan Wang family of Space Tracking Ships.

In the first phase of the US.6 billion project, the Jiangnan Shipyard Corp, a subsidiary of China State Shipbuilding Corp (CSSC), is relocating to Changxing Island to make way for Shanghai Expo 2010. The Jiangnan Shipyard will expand its shipbuilding capacity from the current 800,000 deadweight tons (DWT) a year to 4.5 million by 2010. The new yard's first ship is expected to be delivered by 2009.

In the second phase of development, CSSC's subsidiaries, such as Hudong and Waigaoqiao, will add more yards along Changxing island's 8-kilometre coastline.

"The central government has called on China to become the largest shipbuilder in the world. The Changxing base is the most important step forward in this plan," said CSSC President Chen Xiaojin. Chen said the Changxing yard offers CSSC an unprecedented opportunity to develop its business as the global shipbuilding market is still expanding.The yard will also increase Chinese production of high-tech and high-value-added ships, including liquefied natural gas carriers and super oil tankers.

June 3,2005 also witnessed the 140th anniversary of the Jiangnan Shipyard.The yard was founded during the late Qing Dynasty, and was the first manufacturing base to produce steel, naval ships and steel cannon.

March Toward The Deep Blue 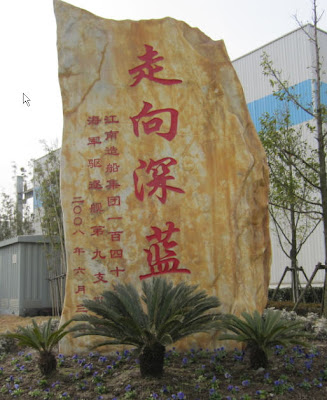 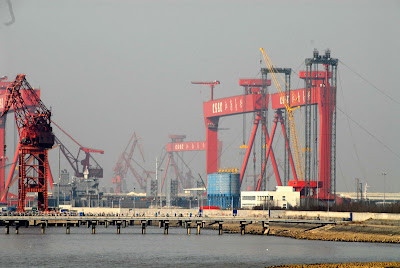 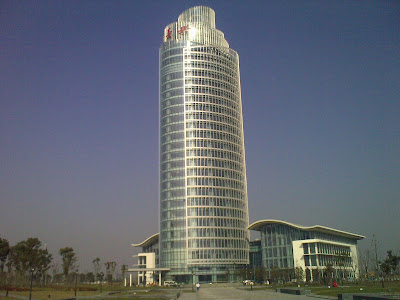 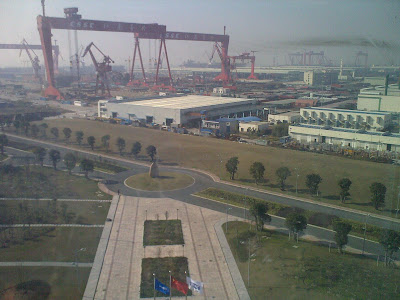 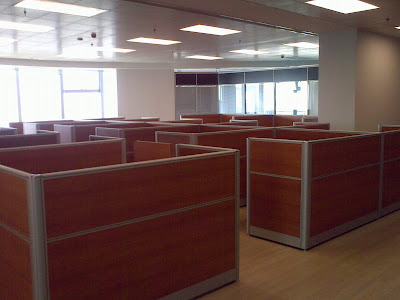 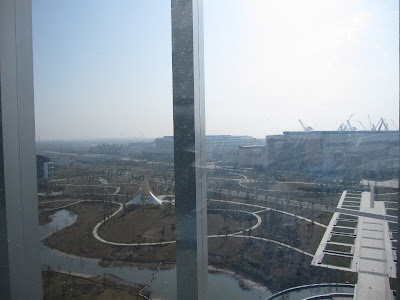 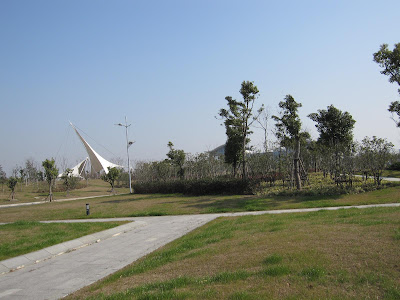 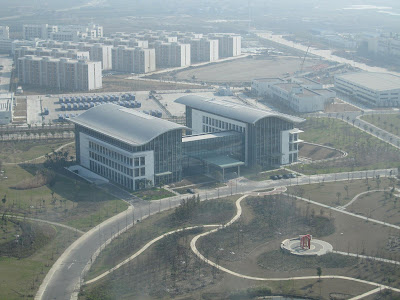 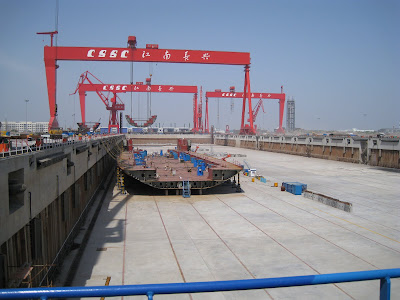 Rick Joe said...
This comment has been removed by the author.
4:40 PM

At Hyundai Heavy Industries' newest shipyard in Kunsan on the west coast of South Korea, there is no sign of the downturn in shipbuilding.

The vast facility is a hive of activity as cranes move big blocks weighing hundreds of tonnes to the large docks, which are then welded together in the final stages of assembly.

"We have order backlogs that will keep us busy over the next two and a half years," said Lee Jong-cheon, a manager at the shipyard. "We can build a ship in two years, while it usually takes three years at other shipyards."

China overtook South Korea as the world's biggest shipbuilder in the first half of 2007 by winning more orders in terms of deadweight tonnage but South Korea remained ahead in terms of compensated gross tonnes, which is normally used in the industry for international comparison as it includes added value.

However, there are clear signs that South Korean shipbuilders, like their rivals around the world, are now struggling to win orders amid the industry's worst downturn in decades. Worse still, Chinese shipyards are stealing a march on their South Korean rivals. According to Clarkson Research, Chinese shipbuilders received 2.71m compensated gross tonnes of new orders in the first 10 months of this year, which accounted for 52 per cent of total global volume, while Korean yards secured just 1.64m CGTs or 32 per cent.

South Korea is home to seven of the world's top 10 shipbuilders including the biggest three - Hyundai, Samsung Heavy Industries and Daewoo Shipbuilding & Marine Engineering. But China is catching up fast and threatening Korea's market leadership.

China surpassed Korea for the first time in terms of a combined order backlog on the back of strong demand from local shippers for cheaper vessels.

It had 55m CGTs as of early November with a 34.7 per cent market share while Korea had an order backlog of 53.6m CGTs, accounting for 33.8 per cent.

"Korean yards seem to be losing out to Chinese yards in order-taking this year," Morgan Stanley said in a recent report.

"The largest Korean yards do not appear desperate as they have secured enough order backlogs to tide over the current market until the new order environment improves."

Analysts, however, caution against ascribing too much meaning to new order volumes this year as the industry is mired in an unprecedented downturn, with new orders down by about 90 per cent.

Korean shipbuilders, meanwhile, are playing down the competitive threat from China, saying that the Korean industry remains far advanced in making high-tech ships.

Copyright The Financial Times Limited 2010. You may share using our article tools. Please don't cut articles from FT.com and redistribute by email or post to the web.
http://www.ft.com/cms/s/0/be21c8fe-f8cf-11de-beb8-00144feab49a.html

South Korea is still ahead in building Liquified Natural Gas carriers. But this may changed in the future.