Back in October, there was speculation that the 5th J-10 line regiment was being formed (here) and the PLA daily announcement and publicly released photos confirmed it. This is the second upgrade the 9th has conducted during the last five years. In 2005, it's 24th Fighter Regiment at Guangzhou was upgraded to the J-7E and now the 25th Fighter Regiment is dropping its old J-8IID heavy-fighter for the new J-10.


The 9th Air Division emblem is located in the upper-left-corner of this photo. 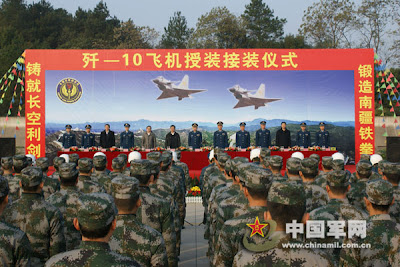 The first batch of four.