A follow up on my "Chinese Avatar?" blog entry

Saturday, June 05, 2010
http://china-defense.blogspot.com/2010/06/chinese-avatar.html
Chinese " Avatar"?
To prevent developers from taking over his land, this Chinese farmer in Jinyinhu fortified his house with homemade rockets. Thus far, he has been able to hold out for more than 2 months as the police requested both sides to restart the negotiation and avert violence. 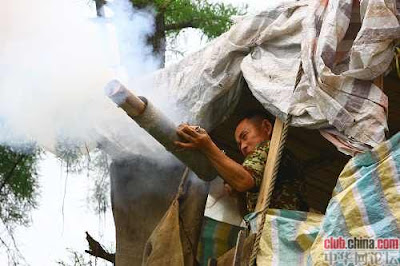 A farmer in China who fired improvised rockets at demolition teams says he has been rewarded with a generous compensation package.

Yang Youde, a 56-year old farmer, was told his land was needed to build new offices.

The developers offered him compensation but he did not think it was enough.

The case highlights the efforts some Chinese are taking to preserve their property rights in the face of forced relocation by government officials.

Mr Youde built a watchtower. When demolition teams arrived, he fired home made rockets towards them, repelling them twice.
Attitude shift

His actions were reported in the Chinese media and by foreign journalists. But local officials were very unhappy.

His elder brother who helped him guard the land was attacked and severely injured at the end of last month.

The authorities deny they were involved.

But Mr Yang has told Chinese state media that since the incident the officials have changed their attitude and become more cooperative.

His lawyer told the BBC the farmer will now receive a compensation package worth more than $112,000 (£74,000), five times the amount offered initially by the developers.

His case has drawn attention to the so-called "nail households" - a phrase used to describe people who refuse to be beaten down by pressure from the authorities.

Many have taken extreme measures to try to protect their property from being seized by officials or developers.

In March, two elderly men in Jiangsu province set themselves on fire to try to stop the local government demolishing their pig farm.

A woman in Shanghai threw petrol bombs at a demolition team last year to protest at their efforts to tear down her home.

Forced evictions are one of the most common causes of unrest in China.

Some lawyers in China say new legislation is needed to ensure that forced demolitions are properly supervised to safeguard the rights of property owners.