While Chinese government officials and academics debate the underlying issues, a supply network of “places” is quietly taking shape [*]. Regardless of whether or not the PLAN develops its support network through a series of formal agreements that guarantee access, or continues to supply its forces as it has been, that network is developing and will in all likelihood continue to grow in the foreseeable future.

For several years now, China has been developing a number of what Kamphausen and Liang refer to as “access points,” or “friendly locations” that are intended to enhance the PLA’s ability to project power in Asia. 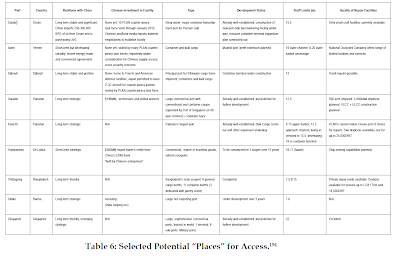 Posted by Coatepeque at 2:47 PM

Isn't the last ship of F22P to be made in Pakistan? If so, would it really be in service with the Pakistan Navy by 2013?

Yes, it will be constructed in Pakistan and I believe the infrastructure work at Karachi Shipyard & Engineering Works has begun. Time will tell.

Thanks for the quick reply! Always a pleasure to visit ur blog =)