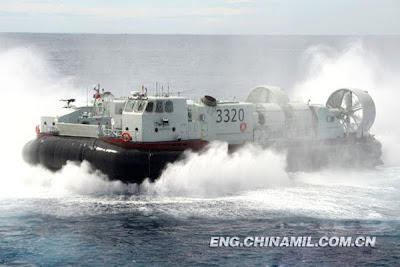 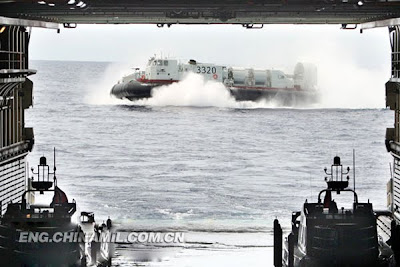 The shipboard air-cushion craft is leaving its mother ship to sail towards the blue sea for the first time. (Photo by Zhong Kuirun)

Recently, the 6th Chinese naval escort taskforce conducted a ship-craft coordination exercise. During the exercise, the first air-cushion craft of the Navy of the Chinese People’s Liberation Army (PLA) slipped out from the stern trimming flap of the “Kunlunshan” dock landing ship and sailed towards the blue sea to conduct practice on such subjects as entering and leaving mother ship and maritime navigation and have a simulated escort exercise with a merchant ship passing through the training waters. This is the first time for the medium shipboard air-cushion craft of the PLA Navy to carry out training on open sea since its launching last December.


The “Kunlunshan” dock landing ship is injecting water to the dock cabin and the high-speed patrol boats are ready to leave the mother ship. (Photo by Zhong Kuirun)


On the morning of July 3, the “Kunlunshan” dock landing ship of the 6th batch of the Chinese naval escort taskforce which had consecutively sailed for nearly 70 hours successfully carried out the raising and lowering operation in the sea area near the Natuna Islands. This is the first time for the dock landing ship of the Navy of the Chinese People’s Liberation Army (PLA) to implement the raising and lowering operation in open sea.

Wei Xueyi, formation commander and chief of staff of the South China Sea Fleet of the PLA Navy, told the reporters that the successful raising and lowering operation in open sea had raised the collaboration and maneuver ability of the “Kunlunshan” warship and the warship-carried boats and was conducive to the smooth accomplishment of the rapid rescue, rapid transportation, warning and dispelling operation in the escort.

By Yin Hang and Yu Huangwei 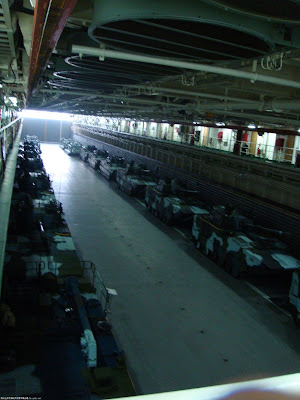