The Shanghai Cooperation Organization (SCO) will conduct a series of anti-terror drills from September 9 - 25 in Kazakhstan, the Russian Defense Ministry said on Wednesday.

The exercise, codenamed Peace Mission 2010, will be held at the Matybulak base near the town of Gvardeisky with each of the SCO member states (China, Kazakhstan, Kyrgyzstan, Russia, Tajikistan and Uzbekistan) contributing at least one operational-tactical group.

Iran, India, Mongolia and Pakistan have observer status in the organization.

The drills will test the interoperability of the SCO armed forces in rendering assistance to a member state involved in an internal armed conflict or subjected to a mass terrorist attack. 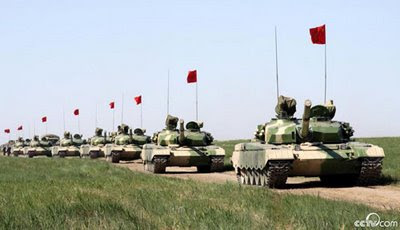 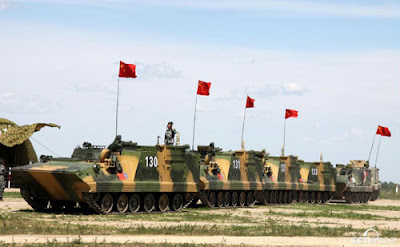 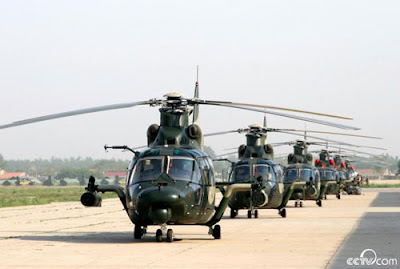 Such display of heavy armor seems somewhat out of place in light of China's current security requirement. To the East is the mountainous terrain of Korea, jungles to the South and yet more mountains to the West and there is an island somewhere.

The only tank-suitable terrain is Russia. Oh yeah, I got it, they want to invade Russia with help from the Russians!

Col (ret'd)Dennis J. Blasko's good write up on the 2009 "dog and pony" show as published in the "People's Liberation Army and People's Armed Police Ground Exercise with Foreign Forces, 2002-2009"

The third in the “Peace Mission” series of exercises was another bilateral Sino-Russian event (though other four SCO member states sent observers). A 1-day “strategic consultation” phase held in Khabarovsk preceded the live troop phase from July 24-26, 2009, at the Taonan Combined Arms Training Center in Jilin. “Peace Mission-2009” was the smallest exercise


of the series, with a total of about 2,600 personnel, half of which were Chinese. The main participating PLA ground force units were elements of the 190th Mechanized Infantry Brigade, the 9th Army Aviation Regiment, and the Special Operations Group of 39th Group Army, Shenyang MR, supported by a PLAAF battle group of 20 fighters (J-8II), ground attack aircraft (Q-5), and fighter-bombers (JH-7), along with an air defense missile and radar unit.65

According to Senior Colonel Lu Chuangang, head of the PLA’s command group in the exercise directorate, “The preparation time for the joint exercise has been shortened from 10 months in the previous exercises to 4 months this year, which show how Chinese and Russian armed forces can mobilize and deploy to a location within a very short time.”66 The exercise scenario was constructed around actions to rescue hostages taken by an armed terrorist group in an urban setting and included blowing up a chemical plant. In particular, the enemy was said to have “a certain degree of organization and combat capability rather than disbanded militants who could be easily put to rout.”67 The terrorists used man-portable surface-to-air missiles in their defense and had access to some sort of aircraft (exact specifications unknown). As a result, for the first time in a “Peace Mission” exercise, PLA and Russian forces were required to integrate air and air defense operations, including the use of their own surface-to-air missiles.68 Senior Colonel Lu also indicated that despite the smaller number of personnel involved, the exercise used “few to represent many” suggesting that the units on the exercise field may have been smaller than would actually be used in a combat scenario.69

The live demonstration phase of the exercise lasted only 1 hour and 20 minutes, but a lot of action was packed into that time period. SOF operations were highlighted, including helicopter insertions, reconnaissance activities, use of snipers, and close quarters combat. The ground assault on the terrorists in the village of “Kunshan” emphasized Russian lessons learned in Chechnya. Several PLA leaders acknowledged that the PLA had much to learn from Russian experience. For example, 190th Brigade Commander Hua Yi stated:

during the plan consultation, the Chinese side proposed that armored vehicles advance into city blocks to provide firepower coverage, which was quickly and specifically denied by the Russian side. According to them, once entering city blocks, armored vehicles would become targets and would be quickly destroyed. The offense should be launched with special forces as the lead, the infantry as the main force, and armor providing the coverage

Pan Liangshi, commander of the 39th Group Army, “was deeply impressed by the Russian military’s ‘taking everything seriously.’ The Russian military strictly follows regulations and rules. . . . When cleaning and maintaining equipment, the Russian troops did not miss any key parts in the equipment that could determine its tactical and technical performance. The maintenance was meticulous and thorough. But they did not care too much about a clean and beautiful appearance of the equipment.”


The Chinese side expended great efforts in providing a comfortable base camp for the Russian visitors. The large tent city was equipped with television, 24-hour hot water, a bank, and two “supermarkets.” Naturally, “slogans and banners” were prepared to welcome their guests.
Posted by Coatepeque at 10:39 PM