The fire and explosion caused no casualties, a city government spokesman said at a briefing at 10 a.m. The fire site was far from residential areas.

As of Saturday morning, fire fighters had switched off valves on all oil tanks and put the flames under control, said Xu Guochen, secretary-general of the city government.

He said more than 2,000 men and 338 fire engines from 14 cities across the province worked through the night to extinguish the fire.

The arrival of the boats in Xingang Harbor in Dalian, China, more than doubled the number that were already on site. They were equipped with oil absorbers and dispersants to help workers clean up an oil slick that had spread across at least 183 square kilometers (71 square miles) off the coastal city in Liaoning Province, the Xinhua news agency said.

The cleanup effort focused on an area south of Dalian's Golden Pebble Beach and east of Bangchui Island.

In all, 24 oil cleanup vessels and 800 fishing boats were engaged in the effort and 460 tons of oil had been collected, he said Monday.

Officials did not know how much oil had been spilled, he said.

Ship traffic at Dalian, China's second-largest port for crude oil imports, was limited so as not to interfere with the cleanup efforts, said Wang Ning, a senior engineer with the maritime affairs bureau of Liaoning Province.

Xingang port was engulfed in flames Friday night when an oil pipeline exploded. That caused an adjacent pipeline to explode, too. More than 2,000 firefighters and 338 fire engines from 14 cities across Liaoning Province worked through the night to put out the fire, Xinhua said.

No one was hurt.

A team was established Sunday morning to investigate the incident. 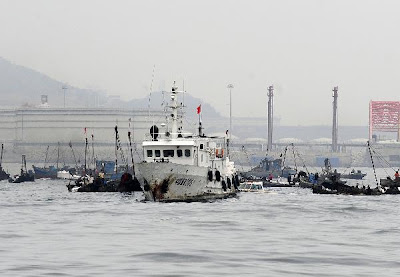 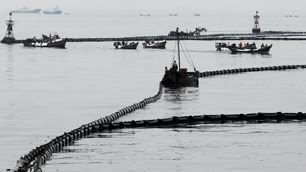 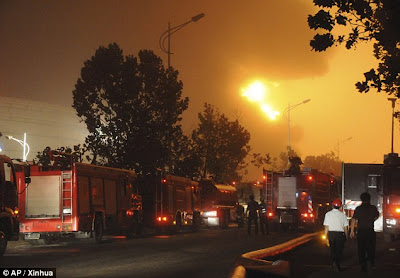 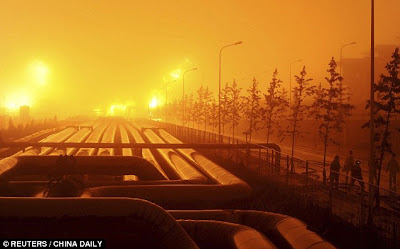 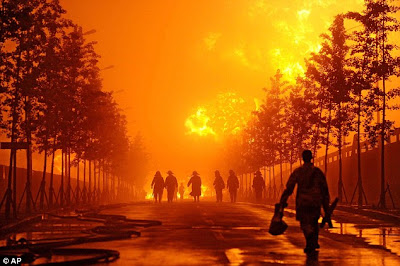 Posted by Coatepeque at 2:00 PM