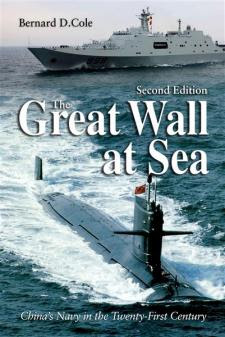 When Bernard D. Cole, Captain, USN (Ret.), a noted professor from the US National War College released "The Great Wall At Sea: China's Navy Enters The Twenty-First Century" in 2001, it quickly became a standard fixture in PLA watchers and policy makers’ libraries. A number of my articles contain quotes from this important piece of work. In 2006 it was selected as part of the US Navy Professional Reading Program for senior leaders.

10 years later, just as the PLAN is beginning to make waves around the Pacific and beyond, Dr. Cole has released a much needed 2nd edition. The 2nd edition follows a similar format to the 1st – it starts with China’s maritime issues and then proceeds with analysis of the PLAN’s hardware (ships and planes) and software (personal and training). The final chapters focus on doctrine, operations and strategy. What differentiates Dr. Cole’s book is its in-depth analysis and how he culls the hype from the reality. This is not surprising considering he served as the Plans Officers for Commander-in-Chief Pacific Fleet, and as special assistant to the Chief of Naval Operations for Expeditionary Warfare.

While many others cite recent foreign deployments as a sign that China’s navy is "maturing" – a lexicon that has been associated with the rise of the PLAN - Dr. Cole avoids the "fear factor" and concentrates on exposing current PLAN shortcomings. Comparing the 1st with the 2nd edition has the feel of opening a time capsule, and gives the reader a sense of how far the PLAN has developed and how much it still has yet to go.
Posted by Coatepeque at 5:46 PM