First it was General Casey's visit to Vietnam on November 22nd; 6 days later, it was General Ma Xiaotian's turn. Despite the wishful thinking of many pundits, don't think Vietnam would give up its hard-won independent foreign policy to a single power.

US Army General visits Vietnam
http://english.vovnews.vn/Home/US-Army-General-visits-Vietnam/201011/121645.vov
Chief of Staff of the US Army Gen. George William Casey Jr., who is on a working visit to Vietnam, was warmly received by Lieut. Gen. Nguyen Quoc Khanh, Deputy Chief of the General Staff of the Vietnam People’s Army, at the headquarters of the Defense Ministry, on November 22.

At the reception, Lieut. Gen. Khanh expressed his hope that the visit would help strengthen the relations and mutual understanding between the two countries’ armies and people.

For his part, Gen. George William Casey Jr. thanked Lieut. Gen Khanh for warm reception and expressed his delight at visiting Vietnam to understand more about Vietnam’s history and its army and people.

Both agreed to further boost military personnel exchange and cooperation on military activities including military medicine and bomb and mine sweeping. 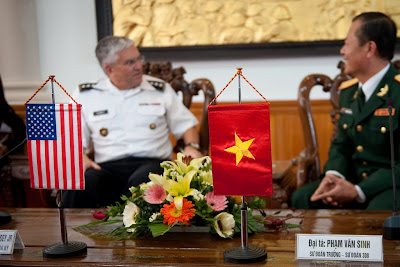 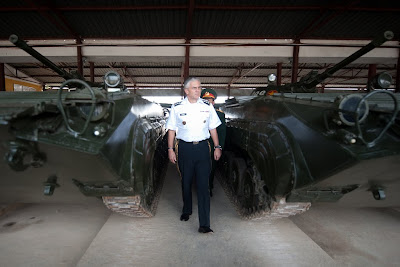 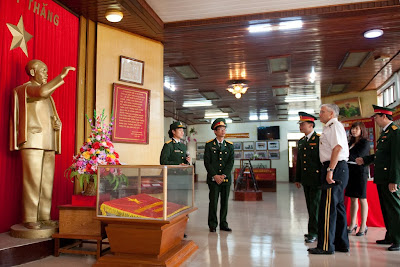 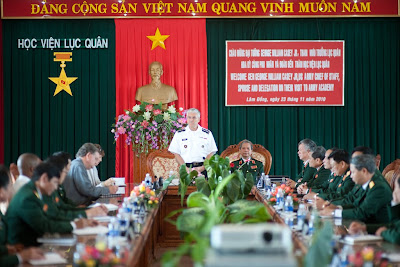 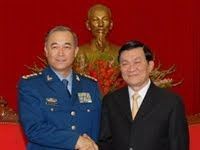 The increased cooperation will help lift Vietnam-China comprehensive development to a new height, contributing to peace, stability, cooperation and development in the region and the world at large, Mr Sang said.

The Party official also affirmed that the Vietnamese Party, State and people’s army always attach importance to the development of comprehensive strategic cooperative partnership with China, considering it one of the country’s foreign policy top priorities.

Senior Lieutenant General Ma Xiaotian, who led the Chinese military delegation to attend the first Vietnam-China strategic defence-security dialogue, briefed his host about the results of the event, saying that the organisation of the dialogue is an important cooperation mechanism, contributing to increasing mutual understanding and trust between the two countries.

He said he hoped that the two sides would continue to increase meetings and delegation exchanges and cooperate in national defence and security, helping strengthening Vietnam-China comprehensive strategic cooperative partnership.

Vinh said the organisation of the dialogue is a manifestation of the traditional friendship and cooperation between the two armies.

The two sides informed each other of achievements in socio-economic and defence development of their respective countries in recent years and exchanged views on defence policy and the security situation in the region and the world as a whole.

They reached high consensus on military and defence cooperation between the two countries in the recent past and affirmed that the dialogue is an important cooperative mechanism, contributing to mutual understanding and trust in their comprehensive strategic cooperative partnership.