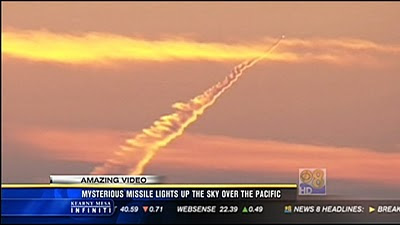 Xinhui has been recalled to Zhongnanhai for urgent consultations so I'm filling in today.

By now you should have heard that a missile was launched yesterday from 35 miles off the coast of California. The launch took place during the Los Angeles afternoon rush hour, and was spectacularly filmed by a local news chopper.

As of now the US Government has not claimed responsibility, nor have there been any of the usual subtle indications of a classified US "Black Program" launch. Eventually it may be determined to have been a rogue rocketry hobbyist, startup suborbital delivery company, or even an inadvertent US launch. Until then we are going to do what we do best at CDF and apply some educated speculation to the possibility of Chinese involvement.

So let's take the leap and assume for purposes of discussion that this was a PLAN sub-launched ballistic missile from the California coast directed towards open ocean.

To Mr. Obama: "Don't get too friendly with the Indians, they aren't going to counterbalance us anytime soon. "

To USN: "You want freedom of passage in our South China Sea EEZ for your military? Now we sail in yours. By the way, you better start spending money on anti-submarine defense of the US coastline again, hope you can afford it."

To US Federal Reserve Bank: "When you agitate your loan shark by habitually making bad decisions with money, they may be kind enough to send you a warning message before they kneecap you."

Is it more likely an SSBN or SSB? My thoughts are that the USN has PLAN SSBN under constant surveillance, but the PLAN 200 GOLF-class or a new 039B SSB(?) could sneak away. There was some internet chatter about the 039B launched in September not being the first one.

Perhaps most telling will be:
What is the total expenditure on delivery pizza at NORTHCOM and PACOM HQ for the past 24hrs?

Interestingly, there was a Notice to Airmen (NOTAM) filed for Los Angeles' Point Mugu Warning Area W-537, AFTER the launch. This NOTAM is active for today, the day after the witnessed launch.

Perhaps this NOTAM indicates the hunt is on now for the "Red November."

Xinhui will be back with his level-headed editorial and analysis soon, until then here's the launch video (no, those aren't jet contrails...): http://www.cbs8.com/Global/story.asp?S=13468118&hpt=T2
Posted by SteveM at 1:59 PM

I do doubt it had any Chinese involvement, though the story of a hunt for a chinese SSBN/SSB is certainly far more exciting than if it were a US mis-launch.

If it was a PLAN sub I have to wonder how the US could let it slip, unless the 094 or 092 is quieter than we believed (if it was a sub it won't have been conventional imho).

The other idea is... maybe it's a russian sub?

George said...
This comment has been removed by the author.
9:58 AM