China recently handed over the first ZDK-03 Airborne Early Warning aircraft to the Pakistani Air Force. While the PLAAF has opted for the KJ-200 "balance beam" array on their Y-8GX5 AEW aircraft, this export variant employs a more conventional "rotodome" array. (photo credit to PafFalcons.com) 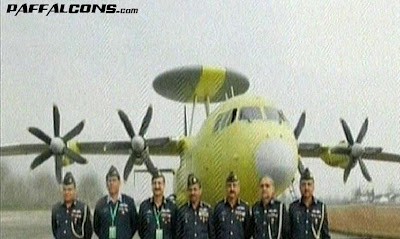 
The rollout ceremony of first of four Chinese ZDK-03 airborne warning and control systems (AWACS) aircrafts for the Pakistan Air Force was held at Hanzhong in China today. The rollout coincided with President Asif Ali Zardari's visit to China – his sixth since assuming the position in
2008.

PAF chief Air Chief Marshal Rao Qamar Suleman was the chief guest at the ceremony, which was attended by the Commander of the PLA Air Force and other military and civil officials of China.

The PAF signed a contract in 2008 with China Electronics Technology Group Corporation for the joint development of four ZDK-03 AWACS aircraft configured to Pakistan's specifications.

The ZDK-03 is an advanced AWACS with sophisticated integrated sensors and communications suite, PAF said in a statement.

In his speech at the rollout, Air Chief Marshal Suleman described the event as "another milestone in the exemplary history of cooperation between Pakistan and China”.

This AWACS will strengthen the PAF's capabilities to maintain "peace with honour in the region", he said.

The AWACS is part of PAF's overall strategy of transforming itself into a "lean and technologically advanced air force", Suleman said.

The PAF will not spare any effort to make the defence of the country impregnable, he added.

CETC Chairman Wang Zhigang said the induction of the AWACS by the PAF will have a "positive impact on regional stability, peace and prosperity as well as on the close bond between the two military forces and two countries".

The remaining two aircraft equipped with the Erieye radar system are expected to be delivered later this year.