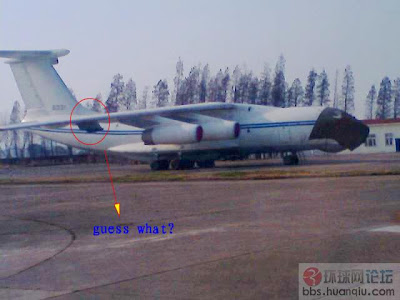 1: It's a testbed aircraft for air-to-surface missiles. The U.S has tested missiles using C-130's before.

2: The Chinese are taking a page out of the Marine Corps' book and arming the IL-76 like the Marines armed their C-130 "Harvest Hawk" with hellfires.

Might also be used for testing high speed plane and space plane models.

Someone on another forum said that the thing looks like an oil tanker and that pylon should be for a wing-mounted refueling pod.

The only problem with using the IL-76 airframe is that up to now Russia is unable to fulfill the old contracts at the agreed on price.

As this is also the airframe of the KJ-2000 AWACS there is going to be a lot of demand for them.

The PLAAF will have to choose between more AWACS or airborne tankers.

The real answer to this is of course making your own - perhaps modified versions of the C919 airframe.