This news is definitely a major milestone for China’s aviation industry. It provides further evidence that China’s state sponsored capitalism (tm) is starting to pay dividends with private western companies. While China is capable of weaponizing the S-76, don’t expect to see one in PLA service soon as such modifications will undoubtedly annoy the US Government.

Sikorsky Aircraft, a subsidiary of United Technologies Corp., and China Aviation, parent company of Changhe, announced the completion of that airframe today. Additional frames, being made in Changhe's factory southwest of Shanghai, are scheduled to be delivered in 2010.

Changhe is a supplier for Sikorsky's three largest commercial helicopter programs. The S-76 helicopter series by Sikorsky Aircraft has long been the aircraft of choice for Fortune 100 companies and offshore oil support operations. - Diane Mastrull 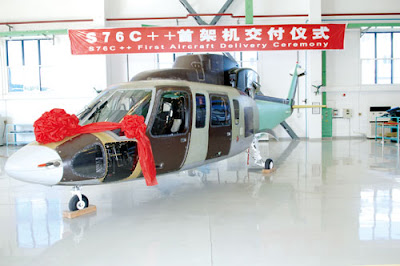 JINGDEZHEN, China, Nov. 23 /PRNewswire-FirstCall/ -- Sikorsky Aircraft Corp. and AVIC today celebrated completion of the first S-76C++(TM) civil helicopter airframe produced in China. The airframe is the first to be built under an agreement between Sikorsky and Changhe Aircraft. Sikorsky is a subsidiary of United Technologies Corp. (NYSE: UTX).

The airframe will be delivered to the Sikorsky Global Helicopters facility in Coatesville, Penn., USA, for customization. Additional airframes are scheduled to be delivered in 2010.

"This delivery meets a key milestone in executing on international collaborations creating the culture and relationships for long term success," said John Bishop, Sikorsky Vice President, Strategic Sourcing. "The region has a strong need for helicopters, and as we establish the S-76 helicopter manufacturing presence here, we are proud to celebrate this first delivery. It is a true sign of the strength of this business relationship and the positive path we are on for the future."

In 2006, Sikorsky reinforced its manufacturing base in China when it signed a Memorandum of Understanding with China Aviation Industry Corp. II (AVIC II, now AVIC), parent company of Changhe. The agreement laid the foundation for a business relationship between the two companies that has led to the production of the S-76 civil helicopter airframes from Changhe’s facility southwest of Shanghai.

The S-76Â® helicopter series by Sikorsky Aircraft has long been the aircraft of choice for Fortune 100 companies and offshore oil support operations. Since its initial certification in 1978, Sikorsky has delivered more than 725 S-76 helicopters and accumulated more than 5.1 million flight hours with 220+ operators in 59 countries.

Sikorsky Aircraft Corp., based in Stratford, Conn., is a world leader in helicopter design, manufacture and service. United Technologies Corp., based in Hartford, Conn., provides a broad range of high technology products and support services to the aerospace and building systems industries. 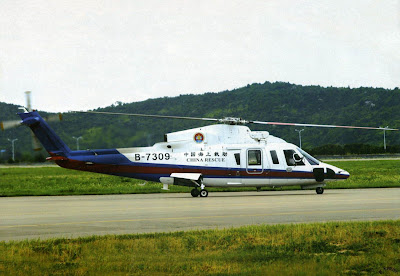