The recently announced Chinese heavy transport project can use all the help it can get. (here). From engines to avionics, GE seems to be everywhere around China's aviation industry 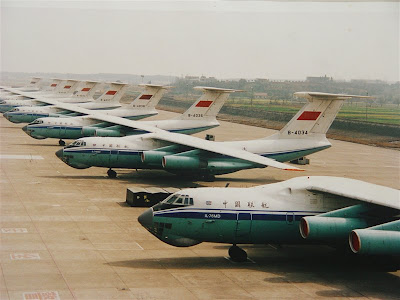 GE is essentially moving its avionics platform to China, angling in part to grab business for a planned aircraft China hopes will compete with jets from Boeing Co. and European Aeronautic Defence & Space Co.'s Airbus.

At the heart of GE's decision is the growth in China's appetite for planes, but the U.S. company also is betting that a China-made jetliner eventually could challenge Boeing and Airbus outside China—a notion seen with skepticism in the industry

GE and AVIC agreed to establish a 50-50 joint venture in China that GE said would be its main platform to develop and market avionics systems for global commercial-aircraft manufacturers. No financial details were given, but GE called it "a substantial investment."

GE defines its avionics systems as the "brains" of the aircraft, helping pilots navigate and operate the plane. The business is is part of its aviation-systems division, which has annual revenue of about $2.5 billion, roughly 13% of GE's total aviation revenue of $19.2 billion in 2008.

The agreement highlights increasing competition among Western aircraft-engine makers and others to supply technology for a large passenger jet China's main state-owned commercial-aircraft maker, an AVIC offshoot called Commercial Aircraft Corp. of China Ltd., or Comac, is trying to launch by 2016. The aim for that aircraft, the C919, is to compete with Boeing Co.'s B737 and Airbus's A320.

The GE-AVIC joint venture, which requires Chinese regulatory approval and is expected to launch in mid-2010, will be "GE's only way to go to market with avionics systems around the world," a senior GE executive said Sunday in Beijing.

Thus, he said, GE will make advanced commercial-avionics technology available for the joint venture without holding back and will do so with the understanding of regulators in Washington.

"This market is huge, and the Chinese aviation industry likely over the coming decades will be one of the biggest, if not the biggest, of the world," said GE Chief Executive Jeffrey Immelt in a speech before signing the agreement with Lin Zuoming, president of state-owned AVIC.

"This joint venture also opens the door for us to serve customers in every corner of the world," said Mr. Immelt, whose presence at the signing further underlined the importance GE attaches to the venture.

Boeing and Airbus are expected to come up with next-generation narrow-body jets to replace their aging jetliners, but by some projections, those replacements won't enter service until the early 2020s. Comac is aiming for a crucial edge by launching the C919 by 2016. Comac, based in Shanghai, has told suppliers it plans to sell 2,500 C919 planes over a period of 20 years.

A top executive at a major U.S. aerospace supplier calls this "overly optimistic," saying it would be a feat if Comac were able to sell 600 to 800 C919s over 20 years. The C919, even if successfully developed and marketed, might lose its luster once Boeing and Airbus come up with new aircraft to replace the B737 and the A320, respectively, he says.

Lorraine Bolsinger, head of GE Aviation Systems, said that while GE's immediate focus is to compete for C919 business, its venture with AVIC also is being established with an eye toward supplying technology for the next-generation narrow-body jets being planned by Boeing and Airbus, as well as business jets and other aircraft in the pipeline.

She said overall world-wide demand for narrow-body jetliners might amount to 20,000 aircraft over the next few decades. GE expects Comac to take a "fair share" of that demand. Such high expectations help explain GE's willingness to share the latest technology to help Comac come up with a competitive passenger jet.

"The whole premise of this joint venture is to bring [to market] advanced technology," Ms. Bolsinger said. Asked how GE would treat technology the U.S. government might consider too sensitive to transfer to China, she said GE wouldn't jeopardize its relationship with the U.S. military but noted that there is a lot of know-how and expertise outside the military realm.

For Comac, the C919 follows last year's launch of its first passenger jet, a 70-seat regional plane called the ARJ-21. GE provided engines for the ARJ-21 and last year signed a deal with Comac to purchase five ARJ-21 jets, with an option to buy 20 more. GE said it planned to lease the regional jets to Chinese airlines.

A major unknown for the C919 is acceptance by consumers, especially in key markets such as North America. Brazil's Empresa Brasileira de Aeronutica SA, or Embraer, which has aimed to compete with Boeing and Airbus for decades, has only been able to break into the smaller, so-called regional-jet business.


AVIC in partnership with Safran, GE
Visitors at the AVIC booth during the Aviation Exop/China 2009 in Beijing [Zhang Wei]

The C919, China's largest domestically manufactured jetliner that is expected to take off in 2016, will source parts and components globally, but foreign suppliers are encouraged to enter into partnerships with Chinese manufacturers, Wu Guanghui, chief designer and deputy general manager of the Shanghai-based Commercial Aviation Corporation (COMAC), which is producing the jet, said yesterday.

"Priority will go to products designed and manufactured by foreign suppliers and their partners in China," he said.

AVIC and France-based Safran Group yesterday signed a framework agreement during the ongoing Aviation Expo China 2009 in Beijing to extend their partnership. The expo started yesterday and ends Saturday.

The agreement includes establishing new facilities in China based on both sides' existing assets, and cooperating on all aspects of a production line, from design, production, assembly, to support.

The short-term targets focus on producing landing and braking systems and nacelles (engine compartment) for the C919, according to a news release by Safran.

The subsidiaries of Safran and AVIC will together submit a joint proposal to COMAC for landing and braking systems on the C919, it said.

Meanwhile, AVIC, GE and Safran signed a memorandum of understanding (MOU) yesterday on setting up a joint venture that designs and manufactures engine nacelles and components for a full range of aircraft applications including the home-made jumbo jet C919.

Lorraine Bolsinger, president and CEO of GE Aviation Systems, told China Daily that the first target of the new joint venture would be the C919 project.

In the long run, "we plan to have the joint venture as a worldwide supplier to pursue new platforms to go beyond C919," she said.

The engine nacelle technology is one of the fundamental elements in an aircraft's performance, efficiency and environmental footprint.

According to the COMAC website reports, a number of major global aviation suppliers have paid intensive visits to COMAC, after the latter issued the invitation for tender on July 10 for engines and airborne equipment to be used on the C919.

Last month, Goodrich Corporation and Xi'an Aircraft International Corporation under AVIC also signed agreements to form two joint-venture companies that will be involved in the manufacture of landing gear and nacelle components, in order to participate in the C919 project.