Obama is such a weakling… chicken soup and Chinese Merlot for state dinner?

Back in the good ole days, real men raise toasts with Maotai, the 150-proof liquor, and joked about how many millions of lives can be scarified in a nuke exchange with the Soviet Union.

Did someone order milk?

BEIJING — After a tough morning of talks Tuesday and some sightseeing, US President Barack Obama finished the day with Chinese-style beef steak and a bit of Stevie Wonder -- played by a Chinese military band.

The visiting US leader was the guest of honour at a state dinner hosted by Chinese President Hu Jintao in the lavish Golden Room of the Great Hall of the People, where red and gold columns surrounded the 13 tables of guests.

Obama sat to Hu's right at the head table -- decorated with a centrepiece of two elaborate birds surrounded by greenery -- and US Secretary of State Hillary Clinton sat on the other side of the Chinese leader.

The head table, which seated more than 20, also included US Ambassador to China Jon Huntsman, Chinese Vice President Xi Jinping and US Commerce Secretary Gary Locke. Chinese Premier Wen Jiabao was not present at the meal.

A People's Liberation Army military band played a selection of Chinese and American music including Wonder's "I Just Called To Say I Love You" and "We Are The World", penned by the late pop icon Michael Jackson and Lionel Richie.

Obama, who began his state visit to China in Shanghai on Sunday, was due to leave Beijing on Wednesday after a working lunch with Wen and a visit to the Great Wall. He will wrap up his four-country Asia tour in South Korea.

Milk - it does a body good 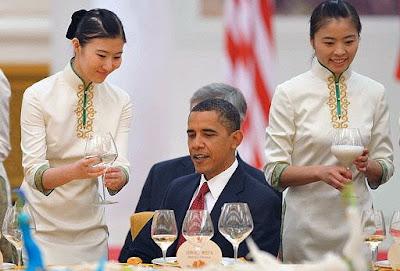 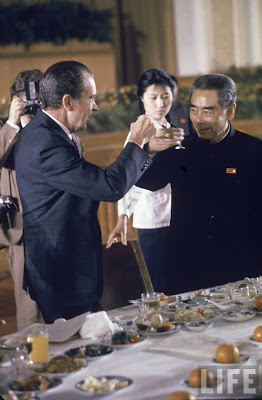