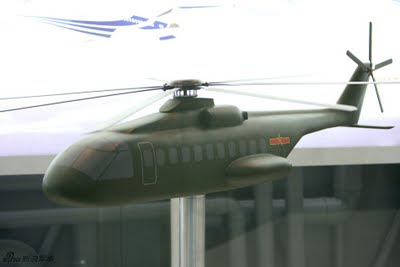 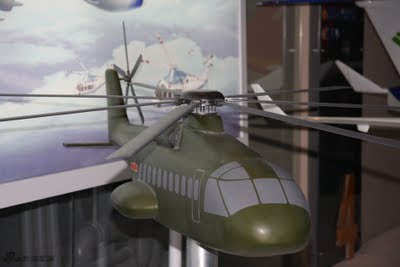 The impetus for Chinese participation in this project stems from at least two operational needs:

The first was identified during the Light Mechanized Infantry Regiment operational experiment begun in October 2005. This experiment focused on the development of a mechanized air assault capability, but the size of air assault vehicles was limited to the capacity of a Mi-171 helicopter. (Read our 2006 analysis of the experiment here).

The second operational need for a heavy-lift helicopter was identified during the 2008 Sichuan earthquake. Two Mi-26 helicopters previously leased by the Chinese for firefighting duties flew to the devastated area and made a substantial contribution to the relief effort.

While the capable Mi-26 is still in production and available, it is simply too big for many Chinese heavy-lift requirements such as shipboard use.

Read more about this development here.
Posted by SteveM at 7:08 AM