A Chinese remote sensing mission, believed to be a military reconnaissance satellite, lifted off from a desert launch pad on a Long March rocket on Wednesday, state media reported.

The Long March 2D rocket blasted off at 0842 GMT (3:42 a.m. EST), or during the afternoon at the Jiuquan launching base near the border of northern China's Inner Mongolia and Gansu provinces.

The 135-foot-tall booster's two stages, fueled by hydrazine and nitrogen tetroxide, guided the Yaogan 7 payload into a sun-synchronous orbit about 400 miles high, according to public tracking data.

But the craft is likely an electro-optical spy satellite to be operated by the Chinese military. Observers believe the Yaogan series, which began launching in 2006, is a new fleet of high-resolution optical and radar reconaissance satellites. The new satellite would be the third Yaogan spacecraft fitted with an optical imager.

Yaogan 7 was built by the China Academy of Space Technology under the China Aerospace Science and Technology Corp., according to Xinhua.

Wednesday's launch was announced less than a day in advance, typical publicity for Chinese military launches.

The flight was the fifth launch of a Chinese Long March rocket this year, and the 69th space launch to reach orbit worldwide in 2009.


Here is the original Xinhua report.

The satellite was successfully launched into the space on a Long March 2D carrier rocket at 4:42 p.m., the center reported.

It will be mainly used for scientific experiment, land resources survey, crop yield estimates and disaster prevention and reduction, according to the center.

The flight was the 120th of the Long March series of carrier rockets.

The satellite's predecessor, "Yaogan VI," was launched in April, from the Taiyuan Satellite Launch Center in northern Shanxi Province.

"Yaogan IV" was also launched last December from Jiuquan and "Yaogan III" from Taiyuan in November 2007. 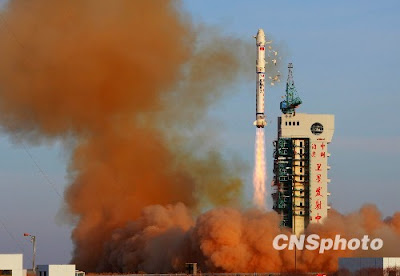 The reality of the situation is, quite simply, that high-quality imaging and remote-sensing satellites have the virtue of dual-use, both civil and military.

Who is to say who actually dictates what this satellite will image?

Photographs taken by CNES' Spot series of earth-imaging satellites have been used by both civilian and military services.

China's Yaogan series is likely to fulfill the same mission.

Photograph of the launch is interesting, is that reddish-brown cloud from dust or is it produced by the rocket's engines?

If it is the former, keeping the rocket and the equipment clean must be a formidable challenge.

If it is the latter, CALT may be using an oxidizer rich mixture, as nitrogen dioxide is a orange-to-reddish-brown gas.

Thanks for the link but for it is an old news for PLA watchers.