In juxtaposition for influence, the Chinese government is offering security aid and financial assistance to Nepal.

Nepal is home to 20,000 Tibetan exiles and the "Tibet issue" is calculated heavily into the Sino-Nepal relations. The Chinese is thankful for Nepal's role in breaking down the pro-Tibetan activities at its territory, especially during the aftermath of the March 2008 riot. (here) The Communist Party of Nepal led coalition government's friendly stand toward China also helps to improve relations.

Norinco WZ551 APC in service with the Nepalese military. 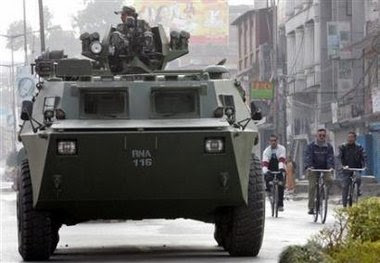 Kathmandu: In a move that may raise concerns in India, China has pledged a slew of financial assistance to Nepal, including military aid worth Rs100 million for the supply of "non-lethal" security equipments and training the Nepalese Army.

China will also give Nepal Rs20 million to rebuild its Consulate General Office in Lhasa, Tibet's capital. China has also increased its annual assistance by Rs1600 million, which was limited to Rs1100 million until last year.

Foreign ministry sources said that Chinese side is positive regarding Nepal's request and agreed to provide phase-wise assistance for the multi-million dollar project.

China has allotted about Rs20 million for construction of the consulate building. The existing building that houses the consulate is old and needs to be replaced by a new one, an official said.

The announcement was made during bilateral talks held by visiting deputy executive vice-chair of Tibet Autonomous Region, Hao Peng with Nepalese authorities on Wednesday.

China has also agreed to provide Rs30.6 million as food assistance annually from the current year.

Kathmandu: Stepping up pressure on the embattled government
to halt anti-Beijing protests in Nepal, a top Chinese military delegation on Sunday expressed concern over the activities of the exiled Tibetan community here, saying it endangered the security of the communist nation.

They underlined that such protests endangered the security of China, The Himalayan Times online reported today. The military delegation from Tibet arrived in Kathmandu on December 4 to hold bilateral talks on security matters. It is scheduled to visit the Nepal Army and officials of the Defence Ministry.

The government has stepped up security around Tibetan monasteries in Nepal as the Chinese military delegation arrived here, amid fears of anti-Beijing protests by the exiled Buddhist community.

Another military delegation from the mainland China led by a Major General is arriving in mid-December to hold talks on security issues, including increased Tibetan activities in Nepal, according to Defence Ministry sources.

Nepal's embattled Prime Minister Madhav Kumar Nepal will pay his first official visit to China from December 26 amid reports that Beijing will provide generous economic and military aid to the country and train the Nepalese Army.

The government, under intense pressure of China to check anti-Beijing protests, has declared 24 out of a total 59 monasteries in the Kathmandu valley as sensitive, Home Ministry sources were quoted as saying by the Kantipur daily.

The Buddhist monasteries in Nepal are said to have been involved in 'Free Tibet' movement, according to the report.

Based on intelligence reports, the 22-party coalition led by the CPN-UML, has described seven of these monasteries as "highly sensitive" and they have been put under tight vigilance, according to reports.

Furphaling Monastery of Dakshinkali and Sangdeling Monastery situated in Bouddha in the capital are said to be centre of pro-Tibet activities.

The Home Ministry has also intensified security around the Chinese installations in the capital in the wake of possible protests by the Tibetan exiles. The Tibetan community here will gather to honour the Dalai Lama next Wednesday, media reports here said.

Providing assistance to construct a dry port at Tatoplani in the east of Kathmandu near the Tibet border, establishing an economic zone in Paanchkhal and duty free access to 497 Nepalese products in the Chinese market would figure during the high level talks between Prime Minister Nepal and Chinese officials in Beijing.

Prachanda's decision to travel to Beijing first had sparked a row in Nepal.

China has pledged a slew of financial assistance to Nepal, including military aid worth Rs 100 million for the supply of "non-lethal" security equipments and training the Nepalese Army.

Choppers sought in lieu of MA-60s

Nepali Ambassador to China Tanka Karki told myrepublica.com from Beijing that he recently forwarded the government´s proposal to Chinese authorities in a bid to settle the nearly five-year-old deal to buy MA-60 turboprops. “The Chinese authorities are positive to our request,” Karki said on Thursday.

Nepal had ordered to buy the MA-60 turboprop civilian aircraft from the Chinese manufacturer Xi´an Aircraft Industry Group Co during the royal regime in 2005. But Nepal refused to buy them after the removal of the royal government in April 2006 though the twine-engine aircraft were manufactured as per the $27 million deal.

Shan Yiduo, spokesperson for the Chinese Embassy in Kathmandu, had recently told myrepublica.com that the embassy had no knowledge of Nepal´s request.

Officials in Kathmandu said the Chinese manufacturer has sought compensation from Nepal for not purchasing the 56-seater aircraft.

“I have asked the Chinese authorities to consider the compensation in view of friendly relationship between the two countries and our economic condition,” Karki said.

The aircraft supposed to be purchased initially for Nepal Army under ´buy two get one free scheme´ is the original Soviet Antonov An-24 and has upgraded Pratt & Whitney engines and Rockwell avionics. Although the MA-60 aircraft has been exported to Zimbabwe, Fiji, Eritrea and Congo, it doesn´t have UK or US Federal Aviation Authority (FAA) certification yet and has been decommissioned from service by China´s own Wuhan Airlines and China Eastern Airlines.

Lately, even the government has shown its promptness to resolve the deadlock over the deal. On November 22, Prime Minister Madhav Nepal, during an inspection of the Nepal Army´s air strength, directed Finance, Defense and Civil Aviation secretaries to prepare Nepal´s stance on the deal and settle it once and for all, according to Subash Devkota, press advisor of Defense Minister Bidya Bhandari.

In the last week of October, Karki had also written to the government, asking it to send a delegation to Beijing to discuss the stalemate over the deal, saying that China also wanted to see the deadlock resolved as early as possible. "I am hopeful that the issue will be settled very soon," he said.

When asked whether the issue will be resolved during the PM´s upcoming China visit, he said, "The matter will be dealt with by authorities of lower level." Nepal is visiting China on December 26.