In light of the military action against the Kokang back on October 2009, the Burma's Wa Army determines to keep its military and gearing up for a fight. The recent negotiation to "integrate" the United Wa State Army (WUSA) into the government controlled "Border Guard Force" has yield very little. The WUSA simply does not trust the Burmese government.

Chiang Mai (Mizzima) – The United Wa State Army (UWSA) under intense pressure from the Burmese junta to transform to the Border Guard Force (BGF) is gearing up for an emergency, observers said.

UWSA has requisitioned its veteran soldiers, who have retired and are living in China.

“They recalled their former soldiers from their respective villages, townships and districts. All former soldiers between 40 and 50 have retired since the time of the CPB,” the Thai based Shan Herald News Agency (SHAN) Assistant Editor U Sein Kyi who closely monitors the region told Mizzima.

It is estimated that UWSA had a 30,000-strong armed force.

“They are calling the veterans from everywhere. They will be assigned duties in accordance with their skills - some will man logistics, some will be on combat duty and some will be in ordnance among other areas. Especially, they will supervise new recruits. They will train and guide new recruits and the people’s militia. Inside information suggests many are coming and joining the UWSA gradually,” U Sein Kyi added.

Wa Army leaders met junta’s top military leaders on November 14 in Tanyang and discussed the BGF issue. But the meeting failed to yield results after the demands submitted by the Wa. The deadline for transformation to BGF was extended to the end of December.

Wa Army sources said they will not compromise on their 9-point charter of demands made to the regime.

It is learnt that Wa Army is digging trenches, repairing roads in Meng Ton, Ho Pan, near Tanyang west of Salween River to take on junta’s forces if necessary.

Sino-Burma border based Burmese analyst Aung Kyaw Zaw, who is close to the Wa said that UWSA has put the people’s militia on high alert and it is in combat readiness.

“The former soldiers retired from active duty for various reasons including old age. Most are battle hardened soldiers. Sometimes people’s militias are more useful than the regular army and many feel they are better at combat than the regular army,” Aung Kyaw Zaw said.

On December 7, a Chinese military delegation led by Lt. Gen. Ai Husheng from Cheng Du military region of the People’s Liberation Army (PLA) visited Burma at the invitation of Lt. Gen. Min Aung Hlaing from the Ministry of Defence and met Burmese officials in Paung Laung guest house in Naypyitaw.

A UN report says that ceasefire ethnic armed forces are worried about their future as the military regime is applying pressure on them to transform before the end of this year and there is political instability along the Sino-Burma border.

The ethnic armed groups in northeast Burma are stepping up their production of opium and other narcotic drugs to buy arms and ammunitions. So opium production in Burma has increased by 50 per cent since 2006, a United Nations Office of Drug and Crime (UNODC) report said. 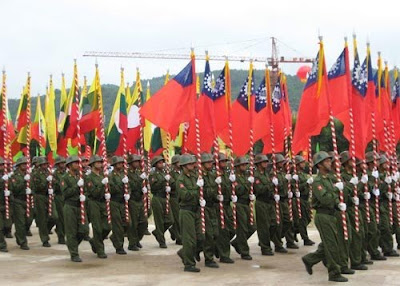 Posted by Coatepeque at 2:48 PM