LIMA, Peru — Peru's military is close to a deal to buy tanks from China, the defense minister said Tuesday.
http://www.chron.com/disp/story.mpl/ap/latinamerica/6760527.html

Rafael Rey told The Associated Press that the army is testing MBT-2000 tanks brought from China, but wants a better-equipped model of the tank. Peru showed the tanks in a parade on Tuesday.

Rey didn't say how many tanks Peru would buy. The Lima newspaper La Republica reported that it plans to buy 80 to 120 tanks and has evaluated Chinese, German, Russian, Ukrainian and Polish models.

The defense minister later told RPP radio that Peru is also planning to look at navy and air force purchases as well.

Peru President Alan Garcia has pushed for a disarmament pact in South America as weapons purchases in Venezuela, Brazil and Chile and a U.S. military expansion in Colombia fuels a budding arms race.

In this photo released by Andina Agency, soldiers wait on their tanks before a military parade in Lima, Tuesday, Dec. 8, 2009. Peru's Defense Minister Rafael Rey said Peru's military is close to a deal to buy tanks from China. (AP Photo/Piero Vargas, Andina Agency) 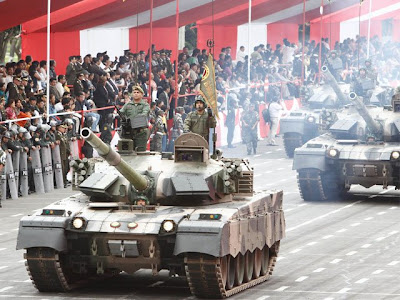 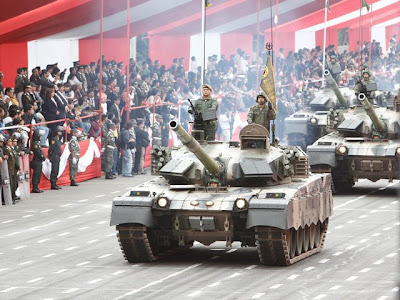 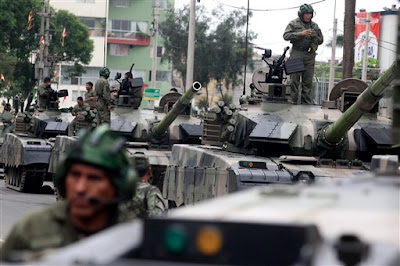 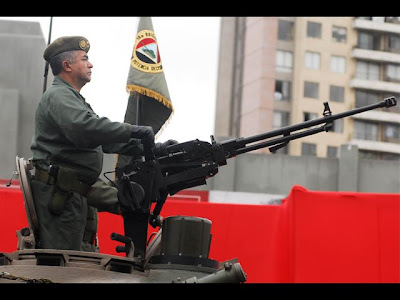 The Peruvian navy held a grand seeing-off ceremony for the Chinese navy fleet which is composed of the destroyer "Shijiazhuang" and the support vessel "Hongzehu" at the Callao Port.

The Peruvian commander of surface forces of the army, Commander Edmundo Deville, Chinese Ambassador to Peru Zhao Wuyi, along with embassy staffs and representatives of overseas Chinese in Peru attended the ceremony.

During the visit, Major General Wang Fushan, vice-commander of the North Sea Fleet of the Chinese People's Liberation Army Navy and head of the visiting fleet met with Peruvian President Alan Garcia, who boarded the "Shijiazhuang" destroyer.

Meanwhile, military bands of both sides staged a joint-performance at the port's square. The Chinese military band also played Chinese music in the China town in Lima.

Departing from Qingdao on Oct. 18 for a four-nation tour, the Chinese navy fleet arrived in Peru on Dec. 3 after its visit to Chile. The rest two stops are Ecuador and French Polynesia.
Editor: Xiong Tong 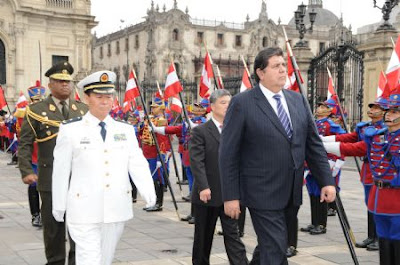 Posted by Coatepeque at 9:35 PM

A surprising development, and if the report about the various tests and comparisons is true, then it means Chinese armor technology is a lot more competitive than is generally believed in the West.

Of course, the reality of the situation is that the majority of Western tanks are larger and better armored than their Russian or Chinese counterparts.

They are also considerably more expensive to buy and operate and generally have larger crews.

Also given the realities of Chile's geography, infrastructure and finances, very large Western-style MBT's would not necessarily be the best choice for Chile's armed forces.

Nonetheless, no military would commit itself to a tank that it felt was greatly inferior to that of its rivals.

This suggests, that China's MBT-2000 must be inside that 'sweet spot' of characteristics that give it a good balance of properties which make it a good deal for the Chilean army.

It will be nice if either Peru/PRC would disclose the financial arrangement being setup for this deal.

It's good that china is selling off older versions of it's tanks and introducing new ones.

President Garcia told the press that he considers as “correct” the decision of the Army and the Ministry of Defense to purchase Chinese tanks, and stressed that such a decision "doesn't contradict our vocation against an arms race."

He advanced that this acquisition is “almost a fact” and that the respective draft agreements with the Asian country have already been signed.

Garcia Perez added that thanks to his Chinese counterpart Hu Jintao, "we got an important reduction, not in price, but in the first payment, and in the period of time in which they must be paid."

The President explained that those tanks “are advanced technology,” and that this purchase is due to the fact that many of Peru's T-55 tanks need to be replaced.

He also said that it would he “irresponsible and unpatriotic” to talk openly about the tank's technical specifications to the media, but that it might be discussed by the Defense Commission in Congress.

You are kidding me?

The most popular option has been to purchase surplus Leopards from Germany. Western technology, but without the high price of buying new.

Unless Peru has some dispute with Germany that I'm not aware of, this deal was primarily driven by the willingness of China to offer attractive terms and financing.

One can look at the new MBT buy as a political message as well.

Earning money online never been this easy and transparent. You would find great tips on how to make that dream amount every month. So go ahead and click here for more details and open floodgates to your online income. All the best.

I think that if those countries have the same facility to buy guns to make deals with food for starving people we were living in a successful place where everybody think in people not in wars Viagra Online.Buy Viagra Generic Viagra