I posted the following back in Oct 10, 2009 (here) and looks like they have agreed to the four million USD ransom demand. The crew will be home by Chinese New Year and that is worth celebrating. 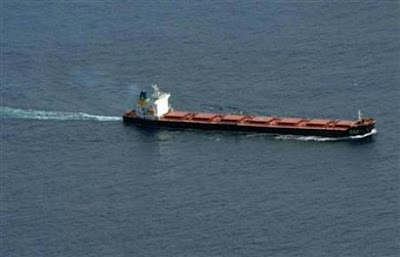 BEIJING (Reuters) - The crew of a Chinese ship hijacked by Somali pirates in mid-October was safely rescued, the Chinese foreign ministry said on Monday, making no mention of a reported ransom payment.

The De Xin Hai, owned by a unit of China Ocean Shipping or COSCO, was carrying coal and 25 Chinese crew from South Africa to India when seized by pirates east of the Horn of Africa, some 700 nautical miles east of Somalia, on October 19.

"The ship has been under the protection of Chinese warships. We will carry out medical checks for the crew, send them to safe waters and bring them back to China as quickly as possible," Jiang said.

The announcement brought to a subdued end a hijacking that had highlighted China's growing presence on global shipping lanes, and brought warnings that Beijing could use military force against the pirates based in Somalia.

The foreign ministry statement gave no details of how the crew was recovered. One of the pirates told Reuters on Sunday a helicopter had dropped a $4 million ransom payment onto the deck of the ship, opening the way to their release.

China sent three warships to Somali waters late last year with great fanfare after a ship carrying oil to China was attacked by pirates. But Chinese warships, like those from other countries, provide protection mainly in the narrow and dangerous Gulf of Aden, not the much larger Indian Ocean.