The Chinese make no secret about their ambition as a major player in the large aviation transport sector and they are pulling out all the stops to make that a success by recruiting foreign execs and acquiring foreign companies.

Foreign acquisitions such as the FACC deal would provide them a boost as they still lack expertise in many areas. A successful merger between a Western style enterprise and a Chinese government owned entity will be a difficult challenge. It is unclear how well those foreign execs, if recruited, will perform under the Chinese management system.

Compete with other players like Boeing and Airbus is out of reach for the Chinese and it will remain so for the time being. They are counting on state-owned airlines buying local and the expected military orders to kick-off the initial production run of the ARJ21, the C919 and the new military transport project.

The acquisition of FACC was therefore "the latest step of Xi'an Aircraft-ACIC joining into the global aviation industry chain. It also indicated a major change in patterns of international cooperation."

The chairman of Austrian FACC Hannes Androsch noted in the interview with Xinhua that, the acquisition of FACC stakes by Xi'an Aircraft-ACIC is in favor of FACC's development. He believed the future of FACC was full of hope: "It created a good opportunity for FACC."

FACC is large specialized companies founded in 1989, engaging in manufacturing composite material in parts and systems. The main products of the company include aerospace structural components and aviation interior products.

It is the supplier of Airbus 380 and sub-tier supplier of Boeing 787, but also the aviation composite material supplier of such internationally well-known aircraft manufacturers as Boeing, Airbus, Bombardier, Alenia Aeronautica and Eurocopter.

Aeronautical composite material is mainly used for producing the aircraft structural parts and interior parts, including wings, fuselage, dome, windows, seats, interior decoration, and so on.

Due to its characteristics of high strength, heat-resisting and anti-fatigue, it is increasingly widely used in the field of application. In A380, aeronautical composite materials accounts for 25 percent of total weight of the aircraft, while for the B787aircraft, it even reaches 50 percent.

Xi'an Aircraft-ACIC is one of the large-scale aviation manufacturer including research and production belonging to ACIC.

Xi'an Aircraft-ACIC also created a new brand "Shenzhou" for Chinese civil aircraft. According to introduction, aircraft "Shenzhou 60" has received more than 170 orders. "Shenzhou 600" would also put into the market next year.

For purpose with participating in the intensive market competition, "Shenzhou 700" is also in the development program, which would be put into market by 2015. 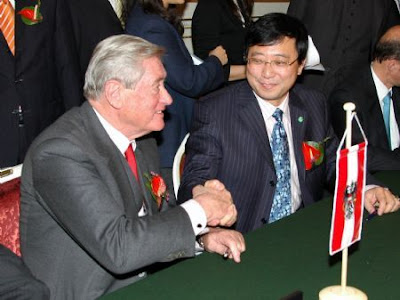 The unusual global recruitment effort comes just months after AVIC was formed by the merger of two state aircraft makers, focusing on big projects such as a locally developed regional jet to reduce China's reliance on Boeing

Thanks, Google translator needs to be blamed.