According to the Xinhua News Agency (here), China has placed an order for 10 Ka-28 anti-submarine helicopters from the Kumertau Aviation Production Enterprise in Russian. First three have already rolled off the assembly line and under flight test. There are 9 Ka-28 in Chinese service and some are currently deployed to the Gulf of Aden with the PLAN anti-pirate task force and in the Arctic with the Chinese Polar Expedition.

At the same time, China has delivered half of the six locally made Z-9EC anti-submarine helicopters ordered by the Pakistan Navy. Geopolitics and price might have something to do with this odd arrangement. (Putin China visit to bring $5.5 billion in deals) 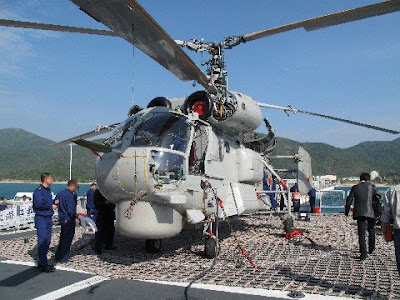 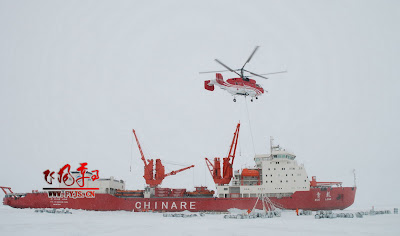 KARACHI: Pakistan Navy has acquired Anti Submarine Warfare (ASW) helicopters Z9EC from China. The induction ceremony was held here on Wednesday at Naval Aviation Base. Chief of the Naval Staff Admiral Noman Bashir was the chief guest on the occasion.

This is the first batch of the series of six helicopters to be procured as per the contract signed with M/s China National Aero Technology Import and Export Corporation (CATIC). The Z9EC helicopters have been built according to the specific requirements of Pakistan Navy and are capable to detect and destroy submarines. The aircraft is configured to carry torpedoes and is fitted with state-of-the-art pulse compression radar, low frequency dipping sonar, radar warning receiver and doppler navigation system. Talking to the media men after the inauguration, the chief guest said that these days the Indian ocean is experiencing intense activity and around 100 ships from different countries are operating at all times for safeguarding their interests.

These extraordinary developments are an indicator of the importance of the trade routes in these waters. Pakistan Navy is also conducting continuous deployment of ships and aircrafts to guarantee guarding our maritime interests. Commenting on the regional stability, the naval chief denied being part of any arms race but expressed resolve to maintain quality in naval platforms and enhancement of capabilities in consonance with the developments in the region.

He also expressed his full confidence in Chinese technology and termed it compatible with the Western one. “Pak-China relationship is time-tested and would further be strengthened with such defence collaborations like F-22 P frigates and Z9EC helicopters projects,” he added. Earlier, in his welcome address, Commander Pakistan Fleet Rear Admiral Asif Sandila highlighted salient features of Z9EC project. He apprised that apart from China, Pakistan is the first country that would operating these helicopters in ASW role.

Later, the helicopter made fly past and staged demonstration of its characteristics and maneuverability. Chinese Ambassador to Pakistan Luo Zhao Hui, representatives of M/s CATIC and a large number of senior naval officers and aviators of Pakistan Navy attended the ceremony. razzak abro 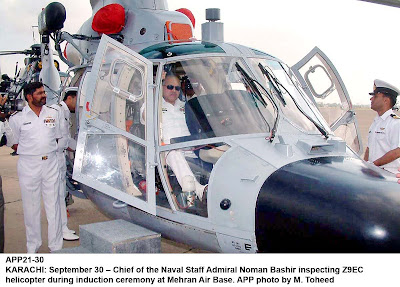