China vows to save crew held by Somali pirates

.......Maybe China needs to be nice and negotiate, others counter that force is the only deterrence against those pirates, At any rate, how do you say "Collateral Damage" in Chinese?

As a side note, PLAN's special operation unit in the Gulf of Aden conducted a shooting practice only four days ago.

China vows to save crew held by Somali pirates. But how?
Chinese officials hint that violent action may be taken to rescue the 25 Chinese crew members aboard a cargo ship seized by Somali pirates on Monday.
By Peter Ford | Staff writer of The Christian Science Monitor

Beijing - Chinese officials are being tight-lipped when it comes to explaining what exactly they mean when they say Beijing will make an "all out effort" to rescue a Chinese cargo ship seized by Somali pirates on Monday.

But if it means they will take military action to rescue the crew, it would be the furthest projection of force from China for its navy in modern history.

Three Chinese military vessels are part of the international anti-piracy taskforce, but they are currently patrolling the Gulf of Aden, almost 1,000 miles from the spot where pirates seized the coal-carrying De Xin Hai and her 25 Chinese crew members.

If Beijing decides on a military rescue operation, "The Chinese could go in hard" says David Johnson, manager of Eos, a private British company specializing in maritime security. "They are renowned for aggressive tactics when they come across pirates. They open up on pirate vessels."

He theorized that the Chinese ships in the Gulf of Aden will try to intercept the hijacked cargo ship before it reaches the Somali coast and the pirate enclave around the town of Eyl.

The pirates warned Beijing Tuesday not to try a rescue. "We tell China not to endanger the lives of their people with any rescue operation," an associate of the hostage takers who called himself Hassan told Reuters news agency by phone Tuesday. "If they try that we will execute the whole crew," he added.

The Chinese have a squad of marine special forces soldiers on maritime patrol in the Indian Ocean and they have gone through simulated hostage rescue drills. Shortly before the Chinese ships joined the anti-piracy task force last December, Chinese TV aired footage of the drills.

In the video, after a failed attempt at negotiating with the "pirates," balaclava clad helicopter and small boat-borne troops storm a vessel and subdue its captors.

Should such tactics be used, the Chinese may seek to take a page out of the American Navy's book. Earlier this year sharpshooters from the US Navy SEALS killed three pirates and rescued the hostage captain of the Alabama, an oil tanker.

The De Xin Hai is the first Chinese-flagged vessel to have been captured by pirates since Beijing's ships joined the piracy patrols. The Chinese crew of another ship successfully fought off pirates with home made Molotov cocktails.

Pirate skiffs have to carry a lot of fuel to give them sufficient range for their operations, Mr. Johnson points out, which makes them vulnerable to fire-bombing.

"Paint thinner in light-bulbs with a cloth stuck in the neck is the preferred weapon, apparently," says Johnson, whose company trains crews and former servicemen how to resist pirate attacks. "It's all pretty crude." 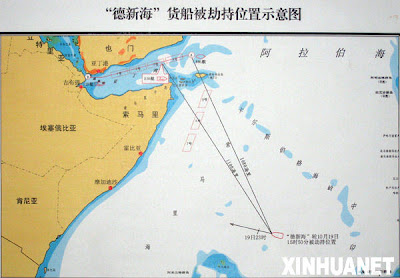 On the afternoon of October 14, 2009, 20 members of the special operation unit (SOU) of the Navy of the Chinese PLA conducted light weapon live-shell shooting practice on the “Zhoushan” warship, which is implementing escort mission in the Gulf of Aden and the waters off Somali coast.

According to Ma Yuqing, the on-spot commander and leader of the SOU, the aim for conducting live-shell shooting practice is to examine the training level of the SOU members, improve their shooting skill under maritime condition and maintain good battle readiness state, so as to better accomplish the escort mission.

Do you feel lucky? 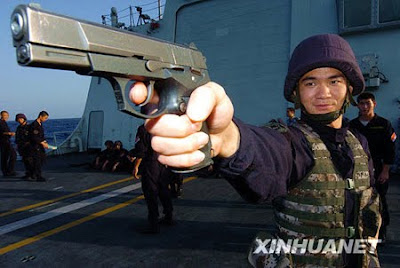 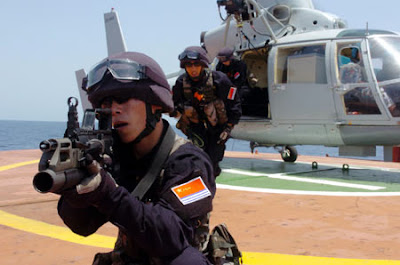 Posted by Coatepeque at 3:41 PM