Y-7 AEW&C Development is "on the Radar Screen" 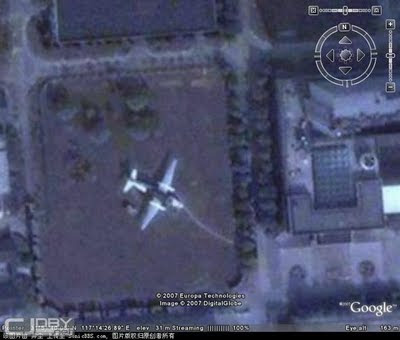 Recent photos have emerged of a Xi'an Aircraft Corporation (XAC) Y-7 Transport fitted with what appears to be a "balance beam" radar. A similar balance beam radar mounted on Y-8W airframes, known as the KJ-200, was featured in the recent 60th Anniversary Parade.

Pictures of this Y-7 balance beam development indicate that some attempt has been made to mount the KJ-200 radar in a smaller airframe. From the images it appears that the aircraft is parked in a field as if it were a static display. However, the balance beam is under camouflage and the aircraft is opened up, indicating some activity is still underway at the time of the photo. Interestingly, both the undated snapshot and 2007 satellite image show the balance beam under camouflage, indicating some attempt to hide the development.

While the larger four-engine Y-8W AEW&C has been adopted by the PLAAF, an AEW&C platform mounted on the smaller airframe has many potential uses ranging from export to most notably a navalized carrier-based AEW&C aircraft.

In its standard production configuration, the Y-7 would not be a good candidate for carrier operations. However, recent commercial success of the Y-7 derivative MA60 airliner has breathed new life into this old design. The latest commercial variant of the Y-7, the MA700, is known to also have a parallel military STOL development.

The tantalizing nexus of a shortened and modernized STOL Y-7 and these recent Y-7 balance beam pics may well be the fixed-wing AEW&C component of the PLAN's first carrier airwing.

For more details on this and other Chinese military developments, join the discussion in the China-Defense.com Forum: http://www.china-defense.com/smf/index.php?topic=4202.0
Posted by SteveM at 8:26 AM

The GE image is of Apr 2004 and not recent. The aircraft has not moved upto 2006 meaning it seems to be only for display.

or being used as a full scale wind tunnel test.

Coatepeque,
aerodynamic testing and measurements are generally done in controlled environment (inside laboratories) and not outside.