Is this the first step in acquiring Kalashnikov IP for exporting other advanced models such as the AK101 by Chinese companies? There's got to be more to this story as Kalashnikov is facing bankruptcy.


"We have received China's national patent for Kalashnikov products. The documents have been handed to the Federal Service for Military and Technical Cooperation to prepare and conclude an intergovernmental agreement in the field," Anatoly Isaikin told journalists.

Isaikin said the process of reaching a deal with China will be lengthy, but that Russia hopes it will be finished soon, and noted the huge number of unlicensed Kalashnikov rifles produced all over the world.

"There are about 100 million Kalashnikov assault rifles worldwide, of which half are counterfeit, i.e. produced without licenses, patents and intergovernmental agreements," he said.

Isaikin said over 15 countries, including Bulgaria, Romania, Egypt, and China, produce the rifles either on expired licenses or without them.

"Even America produces the assault rifles, even though the country has never received a license for their manufacture," he said.

Isaikin said there are at least 30 organizations illegally producing and trafficking the weapons, whose activities are very difficult to prevent.

The best-known Kalashnikov rifle is the 1947 model known as the AK-47. It is the most widely produced used assault rifle in the world, and is used by both regular armies and militant groups.

The creator of the AK-47, Mikhail Kalashnikov, is 89 years old and lives in Izhevsk. 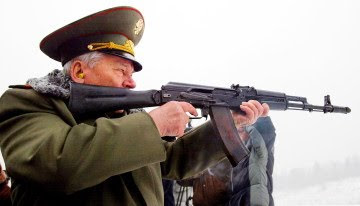 Posted by Coatepeque at 4:53 PM

Nice blog .. I never thought that you going to write about it:) thanks a lot