The original Type 054 pair heads out.

The deployment of FFG-525 and FFG-526 marks the first time members of the third Flotilla, East Sea Fleet are being deployed to the Gulf of Aden.

The third flotilla is modern by PLAN standards staffed with the imported Russian Sovremenny class DDG and the domestic Type 054 and Type 054A FFG. It made news last November when the DDG138 and FFG 525 passed through the Japanese Tsugaru Strait on their way back to China after a Sino-Russian naval exercise near Vladivostok (here)

ZHOUSHAN, Zhejiang Province, Oct. 29 (Xinhua) -- A Chinese navy flotilla will depart from the Zhoushan Islands on Friday to escort merchant vessels and protect them from pirate attacks in the Gulf of Aden, a spokesman with China's People's Liberation Army Navy (PLAN) said Thursday.

The flotilla will be the fourth task force China has deployed to the region since the end of last year.

Missile frigates FFG-525 Ma'anshan and FFG-526 Wenzhou will replace the radar-evading hulled FFG-529 Zhoushan and FFG-530 Xuzhou from the PLAN's third flotilla, which set sail to waters off Somalia in June.

They would join by supply ship Qiandaohu, which has been on duty in the region for about three months.

The PLAN's fourth flotilla would boast a crew of more than 700, including a unit of special forces, and would be equipped with two ship-borne helicopters, the spokesman said.

They would actively take part in international humanitarian rescue missions and conduct friendly exchanges with foreign navies, he said.

China made an unprecedented move by sending three warships to the Gulf on Dec. 26 last year in the first overseas escort mission for merchant vessels.

The PLAN warships have escorted hundreds of domestic and foreign vessels since the first flotilla arrived in the region. 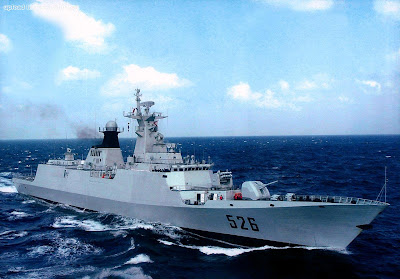 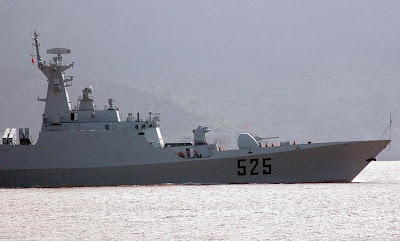 Posted by Coatepeque at 1:41 PM

Email ThisBlogThis!Share to TwitterShare to FacebookShare to Pinterest
Labels: Type 054