Last year’s Vanguard experimented with combat methods with the PLA's new battalion battle-group; it featured 2200 troops that centered on a battle-group augmented by mechanized infantry, artillery, engineering, communication, ECM and army-aviation elements from non-organic sources. The core of the battle-group was drawn by the 1st Tank Battalion of the 58th. The battle-group exercise was divided into four parts -- strategy-planning, mobilization, long-distance maneuvers, and ended with a live fire joint-operation against the “Blue Army” from the Beijing MR at Jinan MR’s Combined Arms Tactical Training Base (CATTB) in Queshan. The exercise was also open to 179 foreign military students representing 67 countries from the National Defense University and the Nanjing Army Command College.


This year’s Vanguard is much larger in scale and focuses on joint "theater of military operations" and includes the entire 58th plus elements from 11 separate service arms. The 300 AFV, 11 helicopters, airborne troops, tactical missiles and air cover will be placed under a single joint operation command. It is noteworthy that the PLAAF's Airborne will conduct its first “vertical landing” at "enemy" bases (all your bases are belong to us)

This year’s Vanguard is closed to foreign observers.

China's "Vanguard-2009" military exercise kicked off in central Henan Province. This year's event will check a series of theories in joint actions, such as commanding and operating mechanisms, battle formations as well as safeguarding patents.

Air and land forces from the People's Liberation Army will participate in this year's "Vanguard."

Soldiers from 11 different services gathered at Queshan Combined Tactics Training Base on Saturday.

A brigade from Jinan Military Area Command is in charge of the ground attacks. The brigade is said to be among the best in the PLA's land forces, consisting of armored forces, artillery, signal corps as well as army engineers.

Zhang Jianfeng, Brigade Commander of Jinan Military Area Command, said, "Our next step is to disperse and hide our soldiers and equipment, and then take joint actions with other services."

Shortly after the issue of the order, nearly a hundred tanks, armored vehicles and self-propelled cannons hid in forests.

And the Guangzhou Military Area Command is mainly charged with air attacks. The air-borne troops have been trained for emergency missions. They can arrive in any part of China within several hours, to carry out their mission.

Peng Jinbo, Deputy Division Commander, said, "In this year's exercise, our air-borne troops will for the first time carry out vertical landings at the enemy's bases, and launch surprise attacks. Our troops are now ready and can accept tasks at any time."

Ten helicopters will also participate in the exercise. They are in charge of tracking enemy fire and giving first aid on the battle field.

The annual drill is aiming to the test capacity of the brigade, in carrying out joint operations with different arms of services, in mountainous areas.

All the equipment in this year's exercise are practicing with live ammunition.

Photos from the 2008 Vanguard. 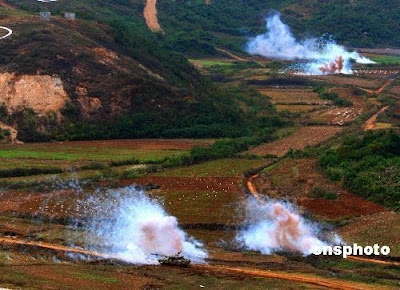 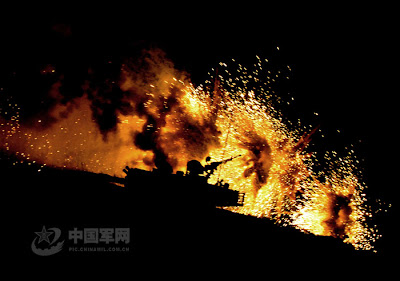 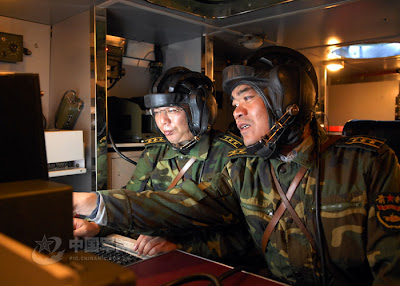 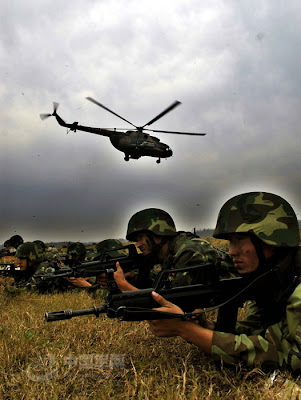 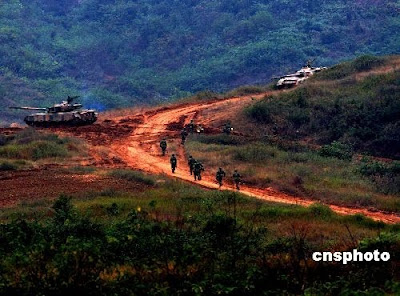